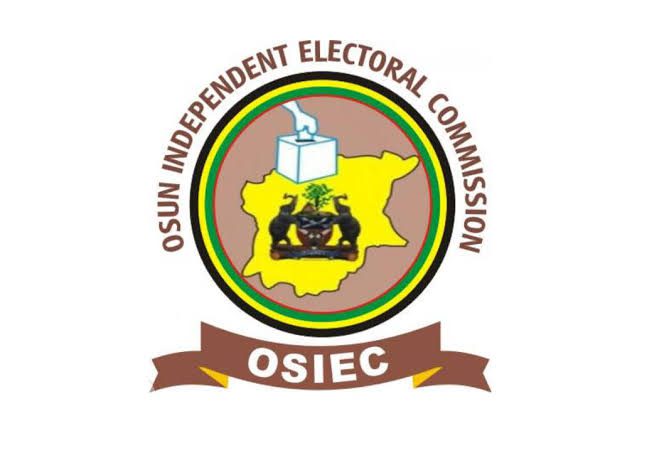 The Osun Independent Electoral Commission on Monday disclosed that the local government elections in the state will be held on October 15, 2022.

Addressing a press conference at the OSIEC office in Osogbo, the chairman, Segun Oladitan, said he was aware of suit challenging the conduct of the polls before the exit of the incumbent Governor Gboyega Oyetola in November, this year, but noted that any individual or party who is displeased should allow the court to do its duties.

He said the mode of the election would be presidential where there would be elections for the office of the chairman and that of the secretary separately, unlike what was obtainable in the parliamentary system which was hitherto in operation in the state.

Oladitan assured members of the public that the commission would conduct a free, fair and credible election and that the poll would not be compromised.
The OSIEC Chairman said the Commission had wanted to conduct the election before now but it was “hampered by a number of encumbrances such as court litigations, COVID-19 pandemic, End-SARS saga and necessary enabling Law.”

“The State House of Assembly had recently enacted Osun State Independent Electoral Commission Law 2022 which had been duly assented to by Mr. Governor.

“The Commission is happy to inform you and the general public that the Local Government Elections in Osun State of Nigeria shall be conducted on the 15th day of October, 2022.

“You would kindly recollect that when this Commission conducted elections in January 2018, it was based on a parliamentary system. I have the pleasure to inform you that the elections we are conducting this 2022 shall be on a presidential system whereby Chairmen of Local Government Councils shall be elected directly and the Ward Councillors shall be elected separately.

“For some time now, the Commission has been making necessary contacts with relevant Stakeholders and carrying out in-house preparations for the conduct of Local Government Elections. As recently as Friday the 12th day of August, 2022 the Commission had parley with all the political parties in the State where they were informed of the impending conduct of the elections. In accordance with the Oath which we members of the Commission took, we shall ensure that the elections are free, fair, transparent and credible,” Oladitan said.

Speaking on the controversy surrounding the statutory number of days the commission is expected to give political parties before the conduct of the poll, Oladitan said, “I am very conscious of the 360 days, 180 days’ notice. The case that was taken to court that culminated into the decision of the Supreme Court in 2010 was mainly that the OSIEC law was a contravention or that is contradicted the then Electoral Act. If the OSIEC law does not contradict the Electoral Act, then the basis of the decision of 2010 has already been taken care of.

The rest now depend on interpretation and based on that interpretation, there are always two sides to it. Let me be specific, whereas the Electoral Act of 2006 spoke about one hundred and something days’ notice, the OSIEC law of 2002 said 21 days and the Supreme Court was certain on pronouncing that that law was contradicted and when there is a conflict between a national law, that is the Act of the National Assembly, and the law of a state, the one of the National shall prevail.

“Let me assure you that I am aware of Section 28 of the Electoral Act, 2022 and I am not going to go in contravention of it, it’s a matter of interpretation.

“It’s not for the commission to answer why it’s coming now. It requires the election management body to conduct elections along with political parties where whoever is going to participate as members of the public are going to enter. For as long as the election management body and political parties understand each other, we are home and dry,” Oladitan noted.

On whether BIVAS will be used during the poll, Oladitan said, “we have not been fully enabled to use BIVAS, and the constitution didn’t say we must use BIVAS compulsorily. We have offices at the different local governments and after training our officials at the headquarters, we shall send them there.”

He alleged that some people had been threatening his life since the issue of the election came up, stressing that anyone who was not pleased with the commission’s decision should approach the court.

“I want to tell the people of Osun State that there is no need for us to heat up the polity. I am aware of cases in court. People have been threatening me that they are going to arrest me and that they are going to imprison me and so forth. Let us do everything in accordance with the law. When your case is already in court, you don’t have to threaten the person you have sued, you have to allow the cause of the court to take its course. I want to appeal to members of the public that there is nothing we are doing that is new.

Anybody who disagrees with what we are doing, there is court; they do not need to issue threats,” he said.

However, the People’s Democratic Party, Osun State Chapter, has described the planned October 15, 2022, local government election as illegal, criminal and injurious to the finances of the people of the state.

Reacting to the announcement made by the OSIEC Chairman, Segun Oladitan, Akindele Adekunle, Chairman of the Osun PDP Caretaker Committee, said the proposed election in a period of about 60 days from and a period of about three months to the takeoff of administration of the Governor-Elect, Ademola Adeleke, was an illegality and would not stand.

He said at a parley convoked by OSIEC on August 12, 2022, the PDP was represented and that a warning letter against the poll was openly presented and spoken to before the Commission.

“The illegality of the purported election is not only what is at play but also the attendant criminality being perpetrated by OSIEC and the financial injury such wasteful calisthenics will foist on Osun people. The content of the said letter is available in the public domain.

“Apparently, the OSIEC Chairman seems adamant in going ahead with the illegal election and as such, we in the PDP will not fold our arms and watch the APC turn our dear state into a lawless entity. We will ensure that the sinister and dangerous plan of OSIEC that has become an appendage of the APC does not see the light of the day.

“Already, we have adequately invited the attention of the Inspector-General of Police to the imminent criminality and we are by this release, further inviting the police authority to the looming breakdown of peace and order in Osun State in the event OSIEC proves to be above the laws of the land regarding the conduct of the election.

“We will engage in all lawful means including mobilising the masses of Osun State, who have entrusted us with the mandate to protect their interest, day-in, day-out, in peaceful protests against the illegal and atrocious plans of OSIEC against the state.

“The PDP assures the good people of Osun State that we will do everything under the precinct of the law in making sure that Osun State is not further dragged into dungeons of economic retardation through the kangaroo election being proposed by the defeated governor and his conduits in OSIEC.

“The illegal election as we have stated recently, is targeted mainly at wasting resources of the state and to cover for some financial infractions by the outgoing APC government.

“For sake of emphasis however, matters concerning conduct of the election are already before competent courts of law and as a law abiding political party, we will rely on the processes enabled by our laws to strengthen the nation’s democracy and enlighten the outgoing APC government to make them come to terms that government activities must not always be premised on crude arrogance and wanton illegality

“Members of the public especially the suffering masses of Osun are hereby called upon to join the PDP in its efforts towards putting out the fire of crisis the defeated APC Administration through OSIEC is trying to plant in the state,”Adekunle said.