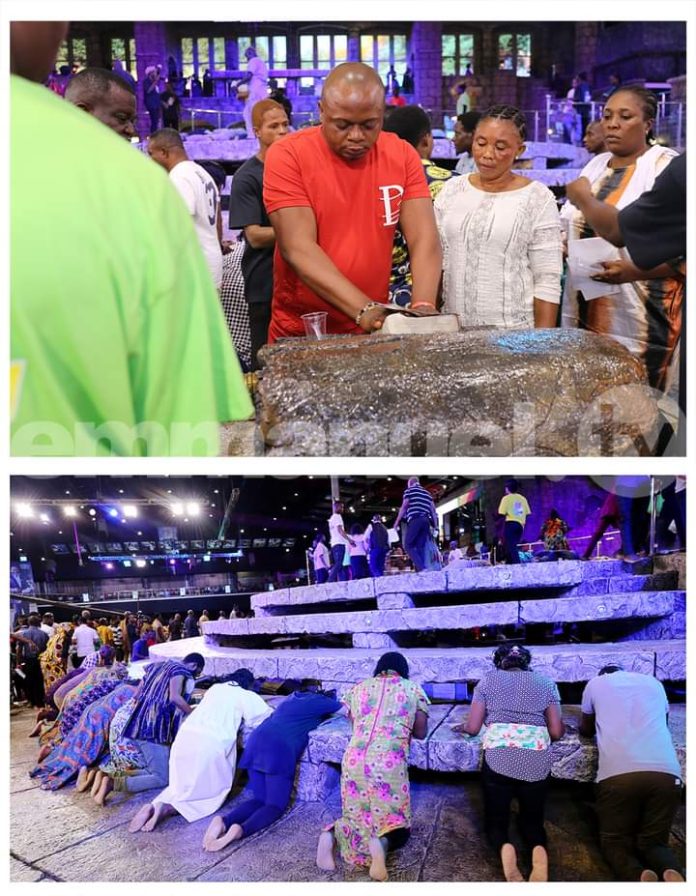 One of the ardent and very precious hearty longings of Prophet TB Joshua while on earth for which he assiduously laboured day and night was to leave behind Christians in sound personal relationship with God.

To him, this is the greatest achievement anyone could have on earth: ability to hear from God, knowing what He wants for you and doing that which is entirely in His pleasure.

He would never fail to admonish, encourage and inspire his listeners to live every day as if it were their last day on earth and transcend the pervadive fad and vogue of cosmetic, superficial Christian life.

Repeatedly and vigorously, he would enjoin all at every opportunity:
“Trust God only. I am a human being like you; I listen to Him on whatever you see me do. Jesus Christ is my Master. If He doesn’t say ‘stretch your hand I will not. Christianity is not a religion but a relationship.

“Try to have a good personal relationship with Him. You can talk to Him and He can talk to you. How can you truly worship God you don’t know? Have you ever thought of that or considered it in order to evaluate your christian life and see whether you are what God wants you to be?

“Do not play with this serious issue of your being. Be committed to God’s words and ensure that in your Christian life journey you do not fail to achieve this. Only then can you have that calmness and peace that comes from knowing God and begin to live as a true human being”.

That’s TB Joshua for you in his characteristically standard of life attitudes.

This spiritual demand was a critical factor in the birth of Living Water Service in the Synagogue Church Of All Nations which he instituted before his departure.

The Living Water Service became a solemn and sober moment of worshippers’ inner readiness to encounter God as they went to the mountain inside the Church to pray and fetch the symbolically living water in a small disposable cup not more than two tablespoon in volume.

The fact is, if a pilgrim’s heart is not ready for God, according to the man of God, such a worshipper has only gone there as a spectator.

That very Living Water Service as used to be done by the late Prophet of God himself was carried out at SCOAN, Ikotun Egbe last weekend, the first time since his passing.

It was a glorious moment of God’s presence and power with the explosion of miracles, healing and deliverance beyond human imaginations.

It was a moment of ‘do it yourself’; ‘me and my faith’; ‘how my heart is and my stand before God.’

It was a new dimension in God’s inscrutable marvellous ways of manifesting to mankind when no servants of God was laying hand or personally praying directly for any of the pilgrims.

Despite the short notice of the event on Emmanuel TV, people trooped in and converged from different parts of the world for an encounter with God and the encounter was real.

The SCOAN leader, Pastor Evelyn Joshua, who God is using mightily at present in positively and gloriously moving the Church forward in God’s directives declared the Living Water Service open and ushered in the enthusiastic, highly expectant pilgrims who filled the church and its overflows to the brim.

“Christianity is in the heart. Let your heart be in tune with God’s. God is ever faithful. His promises are sure and He would never foresake His own. For you to have come from all over for an encounter with our Lord and saviour Jesus Christ in this Living Water Service as given and commanded to His servant Prophet TB Joshua, today His grace, mercy and favour would speak for you” she prayed as she led the pilgrims for their own individuals personal encounters with God.

Last weekend would remain memorable in the annals of Synagogue Church Of All Nations’ history with the upsurge of miracles, deliverances from all bondages of darkness and healings.

One thing was also very clear in the overall experiences: the God of TB JOSHUA is alive.

SCOAN is clearly waxing stronger, the grace of God is copiously abundant for the church leadership and for the glorious continuity of God’s work as founded by Prophet TB Joshua.

Great is the Lord and greatly to be praised and quoting one of the ancient prophets: the mills of God grind slowly but they grind exceedingly fine.

Adejumo, a veteran journalist, is the spokesman for SCOAN.