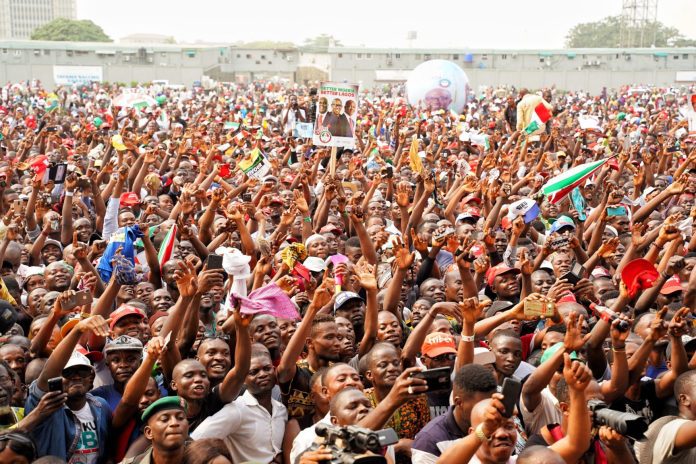 Ahead of the 2023 general elections, the Independent National Electoral Commission last Wednesday blew the whistle for the commencement of election campaigns in line with the amended 2022 Electoral Act.

Expectedly, political parties will be working hard to win the electorate to their sides with their campaign promises in the quest for securing their votes on election day to enable them assume office come May 29, 2023.

According to the INEC, “all the 18 political parties have fielded candidates and their running mates for the Presidential election,” with the leading candidates being, Asiwaju Bola Tinubu of the ruling All Progressives Congress, Atiku Abubakar of the People’s Democratic Party, Peter Obi of the Labour Party, amongst others.

The official flag-off of political campaigns among the major parties, however, didn’t go into full gear as many, especially the electorate would have expected, as only one party, officially launched its campaign, although it wasn’t an outdoor event.

Two of the three leading parties were still battling sundry internal crises going into the kick-off of the campaigns last week, as they both look to go into the exercise united. It was difficult ascertaining how their respective crises, if left unresolved, would affect their performances.

While some members of the ruling party were still highlighting their opposition to the Muslim-Muslim ticket, some members of the main opposition party refused to back down from the call for its national chairman, Iyorchia Ayu, to resign his position after he had allegedly promised to do so if a northerner emerged as the party’s candidate.

Furthermore, the APC’s list of its presidential campaign council appointments generated controversies among party members but that rancour appeared to have now subsided. In the case of the PDP, the aggrieved members, precisely the camp of Governor Nyesom Wike of Rivers State, made good their threat of not participating in the electioneering campaign for Atiku if Ayu remained in office, as they shunned the party’s official campaign kick-off on Wednesday in Abuja.

“Nigerians are yearning for a government that will lead them out of the current socio-economic woes and with five months left before the polls, there is still ample time for these eighteen parties to get their acts together”

For the ruling APC, its campaign flag-off initially billed for last Wednesday, was on Tuesday, postponed indefinitely with a new date yet to be announced as at the time of writing this report. This was after its candidate, Tinubu, jetted out of the country to get some rest before the rigorous full-blown campaign begins this month. His absence at the peace signing ceremony last week has generated mixed insinuations in the political sphere, especially concerning his health. But his minders have assured Nigerians that there was nothing to worry about his health.

In an attempt to douse any form of tension, the Director-General of the Tinubu/Shettima Presidential Campaign Council who is also the Plateau State Governor, Simon Lalong, in a statement last Tuesday, said the postponement was to ensure everyone gets on board before the event officially commences.

Lalong said, “Recall that we had earlier earmarked a peace walk and prayers for Wednesday, September 28, 2022, to officially kick-off our campaigns for the 2023 Presidential Elections. We had also announced that the members of the Campaign Council report at the Campaign Headquarters on that day to collect their letters of appointment.

“However, due to the expansion of the list to accommodate more stakeholders and interests within the APC family, we have decided to adjust the time-table of these activities in order to ensure everyone is on board before activities officially commence. Consequently, the activities earlier announced for the 28th of September will no longer hold.

“As the ruling and most attractive party in Nigeria, we understand the sacrifices and understanding of our teeming members who are more than willing to volunteer themselves for this great task ahead. It also shows the enormous love that the party members have for our candidates.

“A new date and time-table of events will be announced soon,” he assured.

This was also in the midst of a controversial presidential campaign list by Tinubu which the national chairman of the party, Abdullahi Adamu, allegedly rejected in a letter to the candidate. However, the party disowned the letter, describing it as a mere draft, and that it didn’t come from the party chairman.

Attempts to speak with the spokesmen of the APC campaign, Dele Alake and Bayo Onanuga proved abortive, as they didn’t return calls or reply to their messages.

In the case of the main opposition, its presidential candidate kicked-off his 2023 presidential campaign with a public presentation of his three books. As expected, conspicuously absent at the event was the Wike camp that has been seeking Ayu’s removal.

However, it didn’t stop the PDP from inaugurating its 600-member presidential campaign council on Wednesday, with members of the Wike camp excluded, as Governor Udom Emmanuel of Akwa-Ibom State was appointed chairman of the council.

For the PDP, however, the joy of inaugurating a campaign council and preparing to hit the roads for a nationwide campaign was badly dented by alleged bizarre corrupt practices said to be in the tune of N10 billion.

On whether the non-involvement of the Wike camp in the party’s campaigns will have a negative impact on the party’s performance at next year’s polls, Paul Ibe, spokesman for Atiku, dismissed such assertion saying no single person can decide the will of the electorate but, insisted that he is still hopeful that the aggrieved members will fall in line with the party before elections start.

Ibe told The Point that, “The reality is that whether the cock crows or not, the day will break. In the presidential election, we are getting into it, every individual, stakeholder, and voter will answer their father’s name, and nobody will cast their votes for them.

“Yes, these persons are leaders in every sense of the word in their various domains but you have also seen situations where the PDP in their states have told us clearly in the last couple of weeks that they have distanced themselves, it happened in Ondo, Ekiti, Oyo.

“We are still hoping they’ll see the bigger picture and see that the interest of Nigerians lies in getting the APC out and creating new governance that will have the interest of the people at heart. It will never be too late at any point, if they get on board, it is our expectation,” he stated.

On his part, Obi the flag bearer of the Labour Party, and his running mate, Yusuf Datti alongside the party chairman, Julius Abure and other leaders of the party, were received last Wednesday at the Rwang Pam township stadium, in Jos, Plateau State by a very elated crowd.

The mega rally, organised by the Middle Belt Forum in solidarity with the former Anambra State Governor’s ambition, witnessed repeated shouts of “Obi” as the candidate and his entourage arrived, as well as while he was on stage.

As against the widely thought assumption that the event in Jos marked the official kick-off of the party’s campaign, Tanko Yinusa, the spokesperson for the Third Force Movement (National Consultative Front) under the Coalition of Labour Party, denied the assumption, saying the event “was a pre-campaign endorsement” by the Forum.

Speaking to The Point, Yinusa said “The event in Jos wasn’t the flag-off of our campaign. What you saw was a pre-campaign endorsement by the Middle-Belt Forum which organised that particular crowd.

“For the first time in the history of Nigeria, we’re not financing, cajoling or manipulating the people to come out. The Jos airport to the town, about 20 kilometers drive, was filled with a mammoth crowd who were just waiting to catch a glimpse of Peter Obi.”

Explaining the party’s delay in the release of the list of its presidential campaign council and the date of the official kick-of its campaign, Yinusa disclosed that the list will be out this week while the official campaign will commence sometime in October “because of the influx of a lot of people who are decamping from all other political parties to join us.

“The Director General felt it was very important to carry along everybody, for a sense of belonging. That’s why they are putting everything on board to ensure that everyone that needs to be on that list is captured. I understand the eagerness in Nigerians but we just want to ensure we do the right thing, so we don’t deny anybody anything, just like we have seen others do,” he stated.

Nigerians are yearning for a government that will lead them out of the current socio-economic woes and with five months left before the polls, there is still ample time for these eighteen parties to get their acts together.