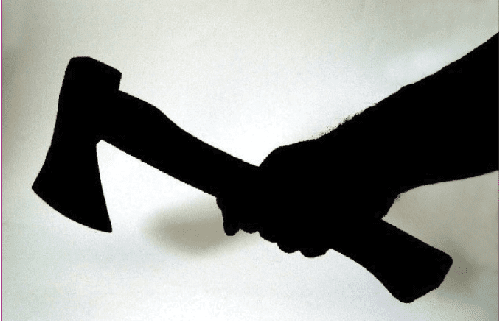 Police in Ebonyi State have arraigned a 32-year-old-man, Arinze Chukwu, for allegedly killing his biological mother after alleging her of being evil to youths of Ndieze 1 community, Okpoto Ishielu Local Government Area of Ebonyi State.

Arinze, who was arraigned at a Magistrate’s Court in Abakaliki, was accused of hacking his mother, Monica Chukwu, to death with an axe.

It was gathered that the 60-year-old woman had reported Arinze to be reprimanded for his bad behaviours, following which the youths of the community tied him up at the village square.

Arinze was said to have hit his mother with an axe out of rage on September 17. Arinze, who had no legal representative, was slammed with one count of murder.

The charge against him read that “Arinze Chukwu, on 17th of September, 2022 at Ndieze 1 Okpoto Ishielu under the jurisdiction of this honourable court, did cause the death of one Monica Chukwu by hitting her with axe on her forehead and thereby committed an offence contrary to and punishable under Section 319(1) of the Criminal Code, Cap 33, Volume 1, Laws of Ebonyi State of Nigeria, 2009.”

The court turned down the plea of the defendant for lack of jurisdiction on the matter.

The trial Magistrate, Blessing Ibeabuchi-Chukwu, ordered that Arinze should be remanded at the Abakaliki Correctional Centre.

She directed the police prosecutor, Inspector Sabastine Alumona, to forward the original case file and other evidence to the Director of State Department, Public Prosecution for legal advice.

The case was adjourned till October 10 for mention.

In an interview with the aged father of the defendant, Anthony Chukwu, he claimed that his son (Arinze) killed his wife because she reported his misdeeds to the village youths.

Acting on the complaint of the deceased, Anthony said that the village youths caught Arinze, tied up his hands and feet, beat him up and then left him in the sun for hours at the village square.

Anthony explained, “That boy (Arinze) is my eighth child from my wife whom he just killed. I was not at home at the time it happened but I know he killed my wife because she reported him to our village youth association. She did not hate him. She made a report to the association to stop his bad behaviour.

“When he was being dragged to the village square, he threatened to kill me and my wife for reporting him.

“Luckily for me, I was not at home when they released him. But, he met my wife and killed her with an axe and fled. I never knew he was serious about the threat until I came back and saw my wife in the pool of her blood. At the village square, the youths punished him by tying his hands and feet and then beat him up. They later left him under the sun for hours to correct him.”