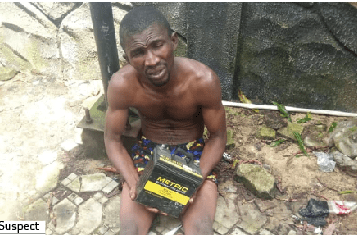 A 32-year-old-man, Oladapo Samuel, has been apprehended for allegedly breaking into people’s cars to steal their batteries.

Samuel, who was said to have been apprehended by some traders while trying to sell some of the stolen batteries, had since been handed over to the police.

A member of the Osun Youth Employment Scheme, simply identified as Bolaji, was said to have noticed Samuel, a regular caller at the Ajegunle motor spare parts market in Osogbo with some used car batteries which he planned to sell.

Bolaji said that he observed that the suspect would come to the area around 8am to approach unsuspecting traders to sell the batteries.

In an interview with The Point, Bolaji said, “I engage in cleaning work at the Ajegunle Market, Osogbo and I do that early in the morning. Most times, I see this man (the suspect) entering the market with a battery and he would later go out of the market without it. I later discovered that he goes to different shops to sell the car batteries in order for the traders not to suspect him.

“After seeing him for about three different times, I raised the alarm. The traders gathered and he confessed that he stole the car batteries. He used to tell the buyers that the batteries were scrap and were no longer good.

“Some of the people he sold the batteries to later discovered that the batteries were working perfectly. Some men from the Dugbe Police Station later arrived at the scene to arrest him.”

One of the victims, Aaree Abdulahi, said that he discovered that the side glass of his vehicle was broken.

“It was through the hole that the suspect created that he opened the bonnet. You could imagine how many vehicles he damaged just to steal the car batteries. I was told that he sold the battery that I bought for N27, 000 for N5, 000.”

Meanwhile, after completion of investigation, the police dragged Samuel before a Chief Magistrate’s Court in Osogbo on account of conspiracy and stealing.

Police prosecutor, Inspector Kayode Adeoye, said that the defendant conspired with others now at large to commit the offence on December 30, 2022, at Aregbe/Gbodofon area, Osogbo.

The charge against him read that “Oladapo Samuel and others at large, on the 30th of December, 2022 at Aregbe/Gbodofon area, Osogbo in the Osogbo Magisterial District, did conspire to commit offence to wit stealing contrary to and punishable under section 516 of Criminal Code, CAP 34, Volume II Laws of Osun State of Nigeria 2002.

“Oladapo Samuel and others at large on the same date and place in the aforementioned magisterial district, did steal Revolt SMF 57512 12V75AH car battery valued at N30, 000 (Thirty thousand naira only) property of one Aare Abdulahi and thereby committed an offence contrary to Section 383 and punishable under Section 390(9) of the Criminal Code, CAP 34, Volume II Laws of Osun State of Nigeria 2002.”

The defendant pleaded not guilty to the allegations.

The defence counsel, Najite Okobe, urged the court to grant the defendant bail.

Chief Magistrate Olusola Aluko granted Samuel bail in the sum of N50, 000 with one surety in the same amount.