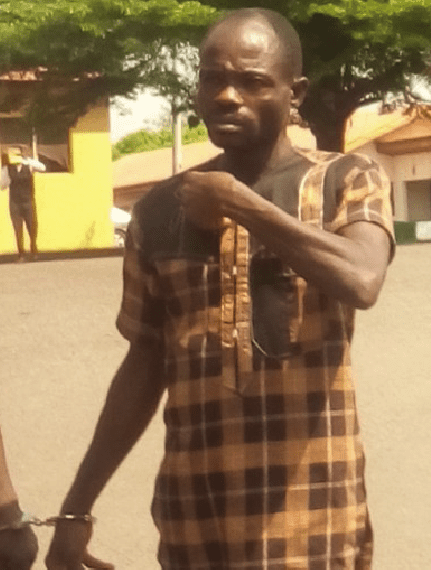 The Ebonyi State Police Command has arrested a 35-year-old man, Nwedu Iruka, for allegedly killing the only child of his concubine when the latter attempted to jilt him for another man.

Iruka was accused of putting rat poison in the food belonging to his lover’s son, thereby causing his death.

The Point gathered that Iruka, father-of-five, poisoned the little boy out of rage, because his concubine had decided to abandon him in order to marry the father of her late son.

It was learnt that Iruka, who was living alone after his wife reportedly eloped with her children over allegations of domestic violence, initiated a relationship with his estranged lover.

However, it was gathered that things went bad between the lovers at a point as Iruka allegedly started maltreating his lover. This reportedly prompted her to return to her old lover.

After failed efforts to convince the lady, he allegedly resulted in poisoning the boy so as to deny her the reason to quit the relationship.
Following his arrest, the police dragged Iruka to a Magistrate’s Court sitting in Abakaliki for allegedly causing the death of little Ogbodo Ejiofor.

The charge brought against him read that “You, Nwedu Iruka, aged 35, on 8th of December 2022, at Agharoza village, Izzi, did cause the death of one Ogbodo Ejiofor, aged one year and six months, by poisoning him with rat poison while eating fufu and thereby committed offence punishable under Section 319(1) of Criminal Code, Cap 33, Volume 1 Laws of Ebonyi State of Nigeria, 2009.”

Owing to the severe nature of the case, the plea of the defendant was not taken.

Magistrate Blessing Ibeabuchi-Chukwu ordered the remand of Iruka in the Nigeria Correctional Center, Abakaliki and adjourned the matter till January 18, 2023 for hearing.