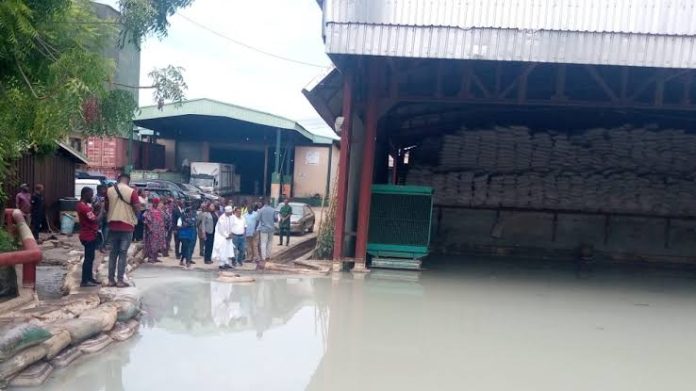 The Manufacturers Association of Nigeria has been lamenting the devastation wreaked by floods at the Onitsha Industrial Harbour in Anambra.

Onitsha Industrial Harbour is a cluster of manufacturing companies located near the Bridge Head on the bank of the River Niger.

National President of MAN, Francis Meshioye, who led its leadership to assess the devastation on Friday, described the flood as massive and unfortunate.

Meshioye intoned that industrialists are patriots working for national economic growth and were resilient in ensuring that manufacturing continued in the face of myriad challenges.

He called on the Federal Government to look into the plight of Onitsha Harbour industrialists and apply medium-term and long-term measures to address flooding at the cluster permanently.

He stressed that government needed to realise that manufacturing is a sector that has to be supported if the economy must grow.

“Compensation is good, but preventing recurrence is the most important thing. There are options like dredging and the building of embankment to prevent overflow and construction of dams.

“If the Lagos state government could address the problem of Bar Beach overflow, the Federal Government should be able to contain this perennial flooding at Onitsha Industrial Harbour,’’ he said.

In his remarks, one of the industrialists, Paul Okonkwo, said it was sad that no lesson had been learnt since 2012 when the new wave of flooding started.

The 2022 incident had worse impact on the area than in the past, he said.

Okonkwo, an octogenarian said the Federal Government should find a permanent solution as well as work out incentives including tax cuts to enable businesses to remain afloat after the flood.

Another industrialist at the Harbour, Chris Oranu, said the flood disrupted entire production chains including the sourcing of raw materials because of the destruction of farmlands.

Oranu said losses incurred by the manufacturers were huge and that there was a need to create an intervention fund to ameliorate the impact on the survival of affected businesses.

“The approach to solution has to be scientific so it can be sustainable,’’ he added.

In her remarks, Mrs. Ada Chukwudozoie, Chairperson of MAN, Enugu Zone, covering Anambra, Ebonyi and Enugu states, said it would analyse the situation and propose a lasting solution to the Federal government.

About 16 industrial sites at the Harbour were partially or totally flooded.

The affected industries have suspended production for weeks after the flood. (NAN)