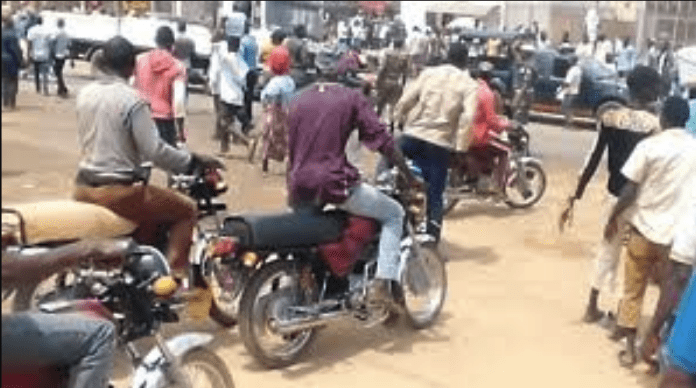 A 25-year-old-motorcyclist, namely Abioye Hammed, has been arrested by the Osun State Police Command for allegedly assaulting three of its personnel.

It was gathered that Hammed, a bricklayer, attacked the three policemen on the allegation that they caused an accident in which he was involved while they were conducting a ‘stop and search’ along the Owode-Ede Road in the state.

The Point learnt that the suspect had refused to obey the order by a police team that he should pull over.

Hammed, who had a female passenger on board his motorcycle, reportedly zoomed off from the police check point and later crashed his motorcycle while trying to escape from another team of policemen unknown to him that the first team had signaled to their colleagues at the next check point.

Angered by the development, the suspect allegedly beat up the three policemen at the spot.

A Police Constable, Abdulazeez Ridwan, was said to have sustained a deep cut on his head in the incident. The suspect was later overpowered and arrested.

Hammed was arraigned at a Magistrate’s Court sitting in Osogbo, the Osun State capital, for prosecution.

Police prosecutor, Inspector Kayode Asanbe, informed the court that Hammed assaulted two police constables and one constabulary with a stick and took their berets away while they were performing their lawful duty.

The charge against him read that “Abioye Hammed, on 16th of November, 2022, at about 5:35pm at New Stadium along Owode-Ede in the Ede Magisterial District, did unlawfully assault Police Constable Abdulazeez Ridwan, Police Constable Oladosu Samsudeen and Constabulary Bakare Kazeem with stick while on their lawful duty and thereby committed an offence, contrary to and punishable under Section 356(2) of the Criminal Code, Cap 34, Volume II Laws of Osun State, 2002.

“You Abioye Hammed, on the same date, time and place, in the aforesaid Magisterial District, did conduct yourself in a manner likely to cause breach of the peace by removing berets on the heads of Police Constable Abdulazeez Ridwan and Police Constable Oladosu Samsudeen of the Nigeria Police while on their lawful duty, thereby committed an offence contrary to and punishable under Section 249(d) of the Criminal Code, Cap 34, Volume II Laws of Osun State, 2002.”

Hammed pleaded not guilty to the two-count-charge of assault and breach of public peace slammed against him.

The defence counsel, T. B. Ayodele, urged the court to grant the accused person bail in liberal terms, stating that the offences against him were bail-able and that the constitution presumes him innocent until proven contrary.

Arguing against the bail application, Kayode prayed the court to remand Hammed on the grounds that the defendant would commit similar offence if released on bail, adding that one of the policemen that he attacked was still nursing a head injury.

He said, “Your worship, the victims are public servants and one of them has a serious open wound on his head. The defendant left the scene after beating the three policemen and traced them to a place and assaulted them again. He came back to the station to cause another crisis. If not for those police officers being patient, another thing would have happened.

“More so, the berets that the defendant removed from their heads are yet to be recovered because he refused to release them. If bail is granted to him, he will go ahead and do worse. Court is the last hope of the common man, including police officers. If nothing is done, some day, he may take (someone’s) life.”

Magistrate I. R. Ladipo granted bail to Hammed in the sum of N250, 000 with two sureties. One of the sureties, the magistrate said, must be a civil servant on, at least, grade level 10 and a traditional ruler within the jurisdiction of the court.

The matter was adjourned till January 19, 2023 for mention. The defendant was taken to Ilesa Correctional Centre for failing to meet the bail conditions.