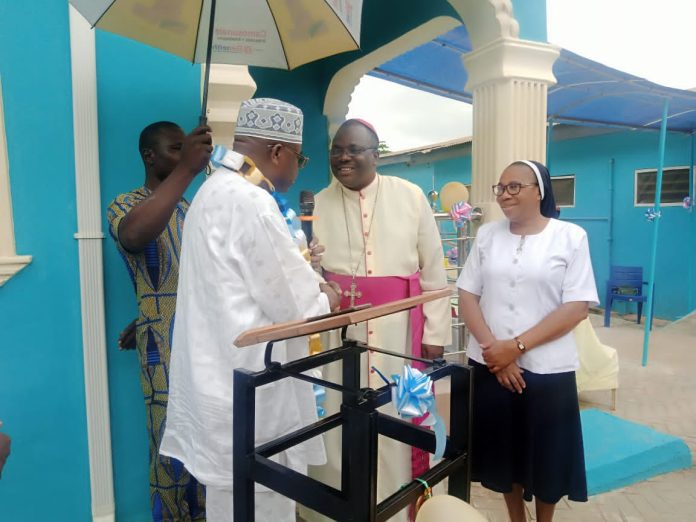 A Muslim, Ahmed Raji, Senior Advocate of Nigeria, has donated a modern surgical theatre to the Catholic Diocese of Oyo, explaining that the Catholic Church had been exceptional in its relations with all people in spite of their religions.

The facility, named Ayisat Aweni Raji Theatre, has modern surgical equipment and is situated within the premises of Our Lady Catholic Hospital Irawote, Iseyin, Oyo State.

Speaking at the inuaguration of the theatre by the Archbishop Emeritus, Catholic Diocese of Abuja, John Cardinal Onaiyekan, Raji said that the donation was part of his service to humanity and to also appreciate the Church for saving lives of the people without religious sentiment.

He said that the Catholic hospital had been a source of blessing to the entire Oke-Ogun area for more than 50 years, stressing that the Church had been exceptional in its relations with all people of different beliefs, status and tribe.

“Our Lady Hospital has been there for us right from childhood; so, it’s a thing of joy for one to contribute his quota to its development. I named the hospital after my late mother to honour her and for her labour of love to her children throughout her lifetime,” he said.

Inaugurating the theatre, Onaiyekan said that true religion could only be seen when people lived in peace, solidarity and friendship.

According to him, the three dimensions of religion – doctrine, worship and behaviour – work successfully when the aim of the people is to glorify God.

He said that the essence of any true religion would be to do good to all in spite of differences in faith.

“It is the act of one who has a good behaviour that brought us together today, we should give and do good to all as the donor has done despite his religion.

“What is happening today is the kind of news that should be spreading in the country and not bad news,” he said.

Badejo noted that many Nigerians believed in peaceful coexistence and invested their energy and resources in collaboration and cooperation for the common good of all.

According to him, for over 50 years, Our Lady Hospital provided healthcare for all and sundry in the community and environs irrespective of tribe, religion or social status.

“In fidelity to the mission of the Catholic Church, the needy and underprivileged are never denied care due simply to what they have or don’t have.

“This, we believe, is the way to demonstrate our faith that God is the Father of all human beings.

“It is also a powerful means of showing that what is wrong with Nigeria is not religion but mischievous people who tend to use religion for their own selfish ends.

“Events like this one will surely help to reduce their toxic influence.

“We are, therefore, proud to have a like-minded ally in Raji to support our bid to create a better society in Iseyin and environs,” he said.