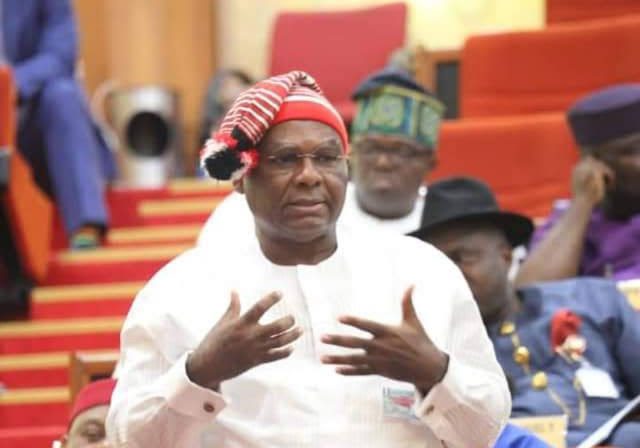 A former Governor of Enugu State and Senator Representing Enugu East in the Senate, Chimaroke Nnamani, has assured his constituents and Nigerians alike that his political career is alive and unshaken.

Reacting to the suspension slammed on him by the People’s Democratic Party National Working Committee over alleged anti-party activities, Nnamani said his suspension from the party came to him as a rude shock and huge surprise.

He stated, “I was never at any time notified of any petition or complaint against me or informed of the grounds that formed the decision of the NWC of the PDP to suspend me from the party.

“I was not also invited to any meeting proceeding or hearing of the NWC of the party where my supposed offence (s) was/were discussed.

“I was therefore, not afforded the opportunity to make representations on my behalf at any meeting where the proposal and decision to suspend me from the party was made.

“I, therefore, appeal to all of you to remain calm and law abiding, while we continue our campaign to a hopefully victorious conclusion.”

Nnamani thanked his constituents, the Ebeano political family, the people of Enugu state and Nigerians for the overwhelming support and solidarity.

He added: “I’m overwhelmed by the outpouring of love and solidarity to me across the length and breadth of Nigeria and even across the political divide since the suspension was announced.

“I’m grateful. It is reassuring that my political career is alive. It is not threatened. We are going into the forthcoming elections very confident. We will win at all the levels of elections in Enugu state. Our people knows where we are; Ebeano.”

Nnamani said that he would continue to provide the needed leadership that would facilitate the delivery of dividends of democracy to the people.

He expressed appreciation to his constituents especially the Ebeano political family for the trust and confidence reposed in him over the years saying “it spurs me to do more. I will not let you down.”

The PDP had suspended some chieftains of the party in Ekiti, Enugu and Imo States over allegations of anti-party activities.

The party on Friday night in a statement by the National Publicity Secretary of the PDP, Debo Ologunagba disclosed the suspension of the party chieftains from Ekiti comprising Emiola Jennifer, Ajayi Samuel, Olayinka Olalere, Akerele Oluyinka and Fayose Oluwajomiloju John.

Others are Ayeni Funso and Ajijola Oladimeji.

Ologunagba stated that all the suspensions were without further delay, commencing from Friday, January 20, 2023,

In a related development, the PDP had also dissolved the executive of its Ekiti State chapter.

The party’s spokesperson who confirmed this in also in a statement on Friday night stated, “The NWC also approved the appointment of Sadiq Obanoyen as Chairman of the state party’s caretaker committee.