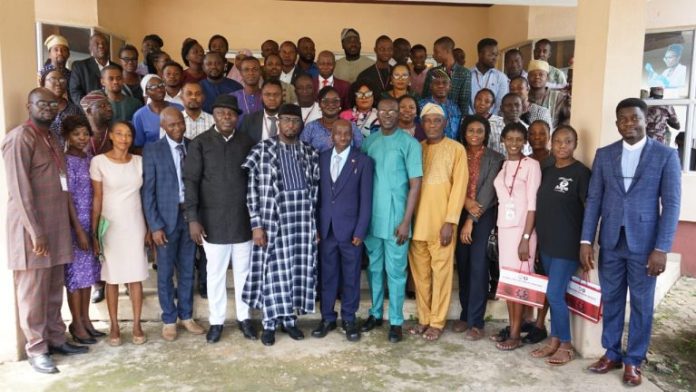 The National Centre for Technology Management has identified Science, Technology and Innovation as panacea to challenges confronting Nigerian masses living in rural communities.

The centre lamented the underdevelopment of grassroots and challenges such as poverty, neglect, diseases confronting rural dwellers, stressing that the solution to these myriads of challenges are in the deployment of STI.

These assertions were made by various STI experts at the Science, Technology and Innovation Management Forum, organised by the centre with the theme: “The Roles of STI in Development at the Grassroot Level,” held at the NACETEM Seminar Room, Obafemi Awolowo University, Ile-Ife, Osun State, on Thursday.

Speaking, the Chairman, Governing Board of NACETEM, l Haastrup Olatunji noted that developed nations of the world had used STI to a great advantage and it was evident in their giant strides in all facets of life, adding that it was high time Nigeria, as a rapidly developing economy, began to drive her development with STI.

According to him, rural dwellers should not be abandoned as the nation strives to develop, adding that the society where the most vulnerable are not attended to, the likelihood of them embracing vices as a means of livelihood and survival is very high.

He said: “This Forum is essentially designed to provide a platform for science and technology technocrats to interface on topical issues in science, technology and innovation for sustainable development. The 2022 edition is specifically tailored towards grassroot development because the global pandemic has left the world in chaos, and the worst hit appears to be the rural dwellers who have access to little or no basic amenities.

“To guarantee a sustainable and just way forward, it is crucial to harness the power of science, technology and innovation to address almost if not all the challenges people at the grassroots are experiencing. In a society where the most vulnerable are not attended to, the likelihood of them embracing vices as a means of livelihood/survival is very high! With many challenges facing our nation, we cannot afford to leave anyone behind in finding lasting solutions to such issues.

“Everyone, including the ones at the lowest rung of the ladder, must be carried along and integrated into the scheme of development. Hence, the need to begin to engage with the critical stakeholders in grassroot development on the significance of STI in development, particularly at the local level.”

In his remarks, John Onimakinde, Overseeing Director-General/Chief Executive Officer, NACETEM, said the centre believed strongly that STI holds the key to the present and future development of any society, disclosing the centre’s resolve to beam its searchlight on STI as a panacea to the issue of underdevelopment at the grassroots.

Onimakinde said: “For a long time, attention has always been on urban development at the expense of rural advancement. This has led to issues such as rural-urban migration, poverty, neglect, diseases, among others which have continued to stunt growth and development at the grassroot level, thereby making rural dwellers extremely vulnerable.

“While many solutions may have been proffered to ameliorate these challenges in the past, there still seems not to have been any significant improvement. For this reason, it is imperative to look at grassroot development with a different lens so as to re-interrogate the identified issues and see how best they can be addressed.

“It is in view of this that the National Centre for Technology Management (NACETEM) has decided to beam its searchlight on science, technology and innovation (STI) as a panacea to the issue of underdevelopment at the grassroots. We believe strongly that STI holds the key to the present and future development of any society. It plays a fundamental role in wealth creation, improvement of the quality of life and real economic growth and transformation in the society. The sooner stakeholders in grassroot development realise that escape from poverty and other anti-development challenges is predicated on investment in science, technology and innovation education, the better.

“To this end, NACETEM, as a knowledge support institution in science, technology and innovation, considers it highly imperative to continue to build capacity of people in this regard so as to aid sustainable development using STI. It needs to be stressed here that there is a vacuum to be filled in the deployment of STI at the grassroots and one of the ways to do it is to mobilise people through education, empowerment and enlightenment. To do this, we have to be deliberate and intentional. We cannot afford to be haphazard about it, as systematic and conscious efforts must be geared towards educating, empowering and enlightening those who would be saddled with the responsibility of using STI to advance development at the grassroot level. Our gathering here is one of such deliberate efforts to brainstorm on how we can collectively adopt STI as a veritable tool of development.”