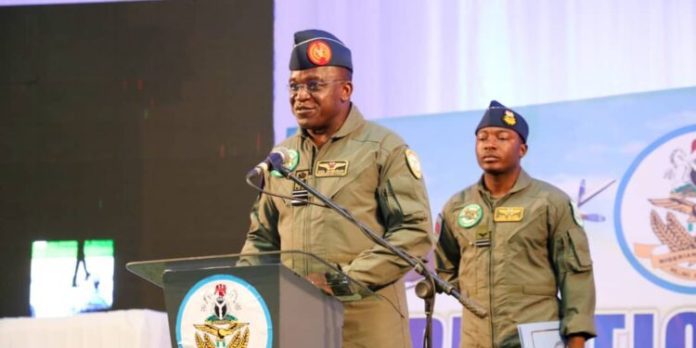 The Chief of the Air Staff, Air Marshal Oladayo Amao, has said that a committee of officers has been instituted to compile all allegations of accidental air strikes on civilians as well as review the circumstances leading to such strikes.

This was disclosed in a press statement by Air Commodore Edward Gabkwet, Director, Public Relations and Information, Nigerian Air Force.

This, according to him, was with a view to proffer far-reaching measures that would mitigate future incidences of collateral damages on civilians during Nigerian Air Force operations.

Air Marshal Amao stated this on Thursday at the opening ceremony of the 2022 Air Operations Seminar held at Uyo, Akwa Ibom State from October 27-28, 2022.

Speaking further, Air Marshal Amao noted that the investigation further aims at promoting accountability, allowing the NAF to learn valuable lessons in order to avoid or mitigate similar cases in the future as well as take extra measures to minimize civilian harm and casualties in conflict areas.

While congratulating 17 young pilots winged as highlight during the opening ceremony of the Seminar, Air Marshal Amao implored the pilots to be prepared for the arduous task ahead noting that, “There is no better way to launch you into your operational flying career than to have you draw from the rich operational experiences of seasoned pilots who will be discussing germane issues relevant to air operations.”

Specifically, Air Marshal Amao reminded the young pilots to always adhere to laid down Rules of Engagement while also taking all necessary steps to protect civilians and minimize civilian casualties during operations.

According to him, “The efforts to mitigate civilian casualties are not just a reflection of NAF values as a Service, but also strategically imperative to our operations.”

The CAS went on to remind the gathering of the security challenges currently impinging on the nation’s stability, but noted that, the Armed Forces of Nigeria has made significant gains in curtailing and degrading the resources and capabilities of miscreants that seek to destabilize the nation.

In particular, he praised the efforts of the NAF at unleashing the coercive effects of air power, particularly on terrorists through intensive air interdiction of their locations and facilities.

These punitive strikes, according to the CAS, have degraded their resources, disrupted their supply lines, and denied them their freedom of movement.

In welcoming other participants and invitees to the Seminar, Air Marshal Amao stated that the theme of the Operations Seminar, “Harnessing Nigerian Air Force Combat Experience in Joint Military Operations for Doctrinal Development,” was borne out of the need to draw instructions from the diverse and rich air combat experiences towards the development of sound doctrinal principles to guide future engagements.

This, according to the CAS, is largely because lessons learnt from previous campaigns remain veritable sources of inputs for doctrinal development.

“Hence the need to re-appraise our past operational successes and failures in order to re-strategize towards a more operationally effective NAF that can contribute to expeditiously ending the current scourge of insecurity,” he stated.

In doing so however, Air Marshal Amao called on the need to take cognizance of the dynamism and complexities of the ever-changing security environment while adopting strategies that would promote NAF’s retention of credible air power capability to prosecute current and future warfare.

In his remarks, the Governor of Akwa Ibom State, Udom Emmanuel, noted that the NAF has lived up to its statutory responsibilities and objectives over the years considering its successful exploits in Sierra Leone, Liberia, The Gambia and Mali which have accorded great international recognition for Nigeria.

He went on to note that the professionalism of the NAF under the leadership of Air Marshal OIadayo Amao has further given the Nigerian State a sense of hope and security.

While acknowledging the great sacrifice that Nigeria’s prestigious serving and retired Airmen have made and continue to make towards the peace and progress of the country, he noted with conviction that with the pragmatic and dynamic leadership of Air Marshal Oladayo Amao, the NAF will be provided with all that it requires to optimally contribute to securing the nation.

On the sideline of the Operations Seminar, the NAF will on 28 October be conducting Sea Flying/Training Exercise using some selected NAF aircraft.

The aim of the exercise is basically to showcase the capabilities of the NAF as well as its presence in the ongoing air operations against crude oil theft in the South-south region of the country.

It is also a training exercise that intends to improve aircrew skills in the tactical aspects of maritime operations thus enhancing their skills.

The well attended 2-day Seminar drew serving and retired officers from the NAF and sister services.