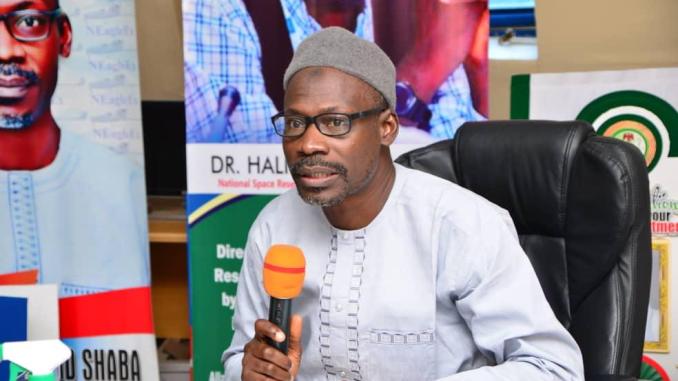 Halilu Shaba Ahmad is the Director-General, National Space Research and Development Agency. In this interview with FRANCIS KADIRI, the Remote Sensing Expert called for greater synergy among security agencies in order to address the country’s security challenges. He said the agency is fulfilling its mandate in line with global best practices, adding that the current management is committed to research and development. Ahmad also said NASRDA is working to drive Nigeria’s quest for advancement in space technology. Excerpts:

President Muhammadu Buhari has said more than twice recently that insecurity will be brought to a very low level by December. How is Nigeria deploying space technology to address security challenges in the country?

Nigeria is still developing and yet, satellite technology has been deployed to some extent. For example, a train was attacked in Kaduna, and the public was able to see the location through a satellite image. It provided a lot of useful information. There is a need for the establishment of special police that are trained specifically for train protection. Then there should be special training and simulation for them to know the terrain. There should be something that familiarizes them with the terrain so that they would know where to turn to when a problem arises along a route. You cannot know the terrain without a satellite image. So, we are doing our best and we are working on more research and development in order to maximize our potential, all geared toward ensuring security for all.

How about the military, are they also deploying space technology to combat insecurity?

The point is that there are a lot of limitations. When it comes to security information, there are serious limitations to what you can share, and it is in the interest of the public. Security information and strategies are not for public consumption. This is a welcomed policy because security strategies must be kept secret. It is not wise for a nation to publicly discuss its security information. For this reason, the military should not divulge the progress they are making, therefore, we may not be able to adequately appreciate the effort of the military to address Nigeria’s security issues. But I assure you that they are doing their best. There may be other limitations and they are working with relevant authorities to address the challenges.

To what extent would you say that NASRDA is delivering its mandate?

As a space research institution, NASRDA is achieving its set goals in line with global best practices. For example, as an institution, we can tell you what Sambisa looks like, and the extent to which it has changed. This is one of the products of our research. We have also studied Lake Chad. Many years ago, Nigerians were moving into Lake Chad. Again there are ungoverned spaces and we are monitoring them. The government wants to know the ungoverned spaces so that it can reach out to them. Information could be available from the civilian to the military, but do not expect that military security information will be made available to the civilian public. We generate information, but it is people-driven because we concentrate on what people need at this particular time. NASRDA is making a lot of engagements in this regard and we are succeeding.

What is your rating of Nigeria in terms of modern policing?

When you compare Nigeria to some other countries, you will agree that in some countries, you have what it takes to trace somebody to his hometown and even to his bedroom.

Although Nigeria is not yet at that stage, the country is making progress to get to that stage. In advanced space technology, information is cascaded even to his bedroom. So criminals who change location are easily tracked and apprehended using technology. In Nigeria, policing is difficult because we have not been able to modernize. In modern policing, space technology helps you expose even criminals who are hiding and who have changed location because there is information about every space. With modern policing, you can trace somebody to his town, his house and even his bedroom. Unfortunately, this type of policing is difficult to carry out in Nigeria because we have not modernized to the requisite space technology. Modern policing has information about everybody and every space in the country. This means every house is captured in its database of space. If you don’t have this technology, you may not be able to police effectively.

Bandits are in the forests but you cannot track where they are going even when you can view them. Satellite imaging should be able to tell you because it gives you the pattern. What this means is that through satellite imaging, you can gather information about the movement of a fleeing bandit for a month, and you will be able to understand his pattern of movement and predict his movement. You can also understand why he moves to particular places at a particular time.

“In advanced space technology, information is cascaded even to his bedroom. So criminals who change location are easily tracked and apprehended using technology. In Nigeria, policing is difficult because we have not been able to modernize. In modern policing, space technology helps you expose even criminals who are hiding and who have changed location”

What is the Defence Space Administration doing about the country’s security challenge?

I believe they are also doing a lot to secure the country, but like I said, in the military, security information is not for public consumption.

What solutions do you propose to address the challenge?

There should be greater synergy between the various security agencies and institutions like NASRDA. Although we all work in different ways, we are working toward the same goal of securing the country. There is the National Intelligence Agency, the military and other security agencies. I think we all need to work together, share relevant information and achieve set goals.

What are your short-term goals in office as Director General of NASRDA?

My short-term goal is to see that NASRDA regains its status as a standard space agency with all the facilities for research in place. We need to focus on research. We are refocusing our agenda, we have decided to strictly pursue and fulfill our mandate, which is space research and development.

What is the level of funding available for the realisation of set goals?

Space research is capital intensive. There is an improvement in the budgetary funding of the agency. Unfortunately, it is not adequate because the Naira to Dollar exchange rate has become very high and there is nothing to write home about when you convert the available funds to dollars. In addition to being a sensitive issue of national security, the capital-intensive nature of space research is handled by only state actors. Governments, not individuals, handle space matters and it is very expensive.

How important is space technology in the current scheme of things?

The satellite came in after the Second World War in preparation for the Third World War. Satellite technology was originally a military strategy. This is because you need communication to win the war. You also need communication to do propaganda and to identify the strength and location of the enemy. As such, it was a military technology. But because a lot of people are going to use it to the disadvantage of those who have no satellite, the Committee on the Peaceful Use of Outer Space demanded that the satellite technology should be made available to civilians because it is the civilians who use the technology more than the military.

If it was restricted to the military, it was going to be a restricted technology. So, in order to liberalize space science and technology, it was extended to the public and you now have citizenry participation in satellite administration. If it were not important from the onset, it would not have been a military technology. A major strength of satellite technology is that it is not a device that the enemy can bring down. So, while it takes cognizance of the location and activities of the enemy, the enemy remains unaware of the fact that they are being watched and monitored. The satellite technology also tells you what the enemy has, their weapons and so on. It also gives you information about the terrain you are about to get into. So, space technology is very instrumental in the planning and execution of military campaigns and reinforcements. It is also used to block attacks and to identify strategic positions. GPS and the Internet are all space technology. Space technology has actually been degraded for civilian use. The military-grade is able to reveal the precise location of the enemy.

How Nigeria will end fuel importation in 2023 – Kyari