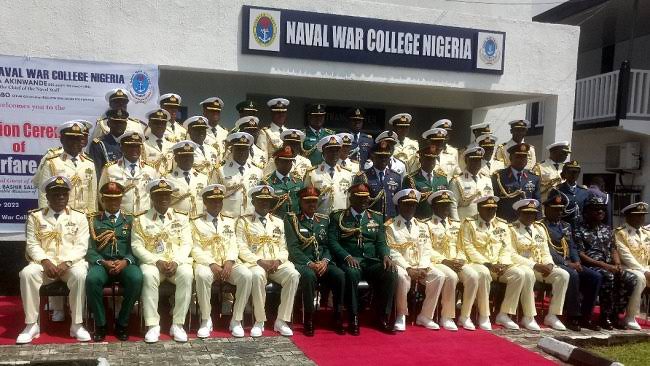 The Naval War College of Nigeria has graduated 22 military officers drawn from the Navy, Army and the Air Force, the News Agency of Nigeria reports.

The 22 graduates, comprising of 17 Naval officers, two Air Force officers, two Army officers and one Cameroonian Navy officer were participants in the `Naval Warfare Course 6′ of the College.

NAN also reports that the Naval Warfare Course 6 programme was inaugurated on March 26.

Speaking at the graduation ceremony in Calabar, Chief of the Naval Staff, Vice Admiral Awwal Gambo, commended the entire Naval War College community for accomplishing the mission of the College.

Gambo, who was represented by Rear Admiral Saidu Garba, Chief of Policy and Plans, Naval Headquarters, Abuja, commended the College for producing well trained operational level officers from the three services to add to the manpower of the Nigerian Armed Forces.

He noted that it was gratifying that the international standard and recognition of the College was gradually being actualised.

“It is also worthy that I congratulate the graduating participants of Naval Warfare Course 6, for weathering the storm and successfully completing the 8 months course in flying colours.

“Our dear country is presently confronted with security challenges.

“Permit me to state that these security threats are not peculiar to Nigeria alone, it is a global issue, characterized by increased inimical actions of some state and non-state actors to destabilize sovereign states.

“Insecurity threatening the existence of Ukraine, Afghanistan, Iran and other countries around the world, underscore the need for militaries worldwide to emplace long term and robust posture to effectively conduct both regular and irregular operations.

“Sequel to this, the Armed Forces of Nigeria has been actively engaged in various operations across the 6 geopolitical zones across the country,” he said.

He added that the operations were to curb the myriads of security challenges most especially piracy within the maritime domain, insurgency in the North-East, banditry and kidnappings in the North West as well as secessionist agitations in the South East.

According to him, some sectional agitators have also attempted to propagate divisive narratives, but the Armed Forces of Nigeria has remained resolute to its responsibility of securing the nation’s territorial integrity.

“Therefore, I must salute the efforts of the Armed Forces and indeed the Nigerian Navy, under my leadership, for its significant contributions toward enhancing national security both in the nation’s hinterlands and the maritime domain.

“My sincere advice to our graduates and future operational level commanders here today is that it is your responsibility to understand and situate yourselves in the complexities of global contemporary security environment.”

Commandant of Naval War College, Rear Admiral Sahad Akinwade, said that the NWCN was charged with the mission “to develop senior naval leaders and equivalent from other services as operational level commanders.

“Officers are trained on thorough appreciation of complex national security problems, who are prepared to make sound decisions in the application of maritime force as a policy option.”

According to him, in order to achieve the mission, the College is mandated to run various courses, principal among which is the Naval Warfare Course.

He said that so far, the College has graduated a total of 90 senior officers of the Armed Forces of Nigeria.

The Commandant charged the graduates to show the defining character of the College as they return to their respective services. (NAN)