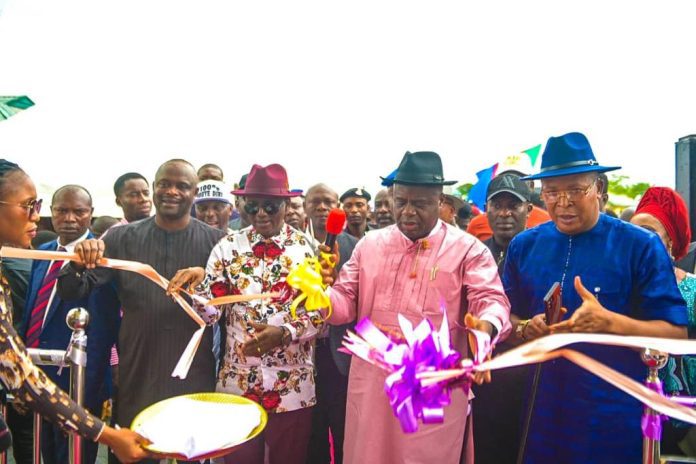 Bayelsa State Governor, Senator Douye Diri, has said all incoming local government chairmen in the state will reside in their council headquarters to enable them perform effectively.

The tenure of the current council chairmen expires on August 14.

Senator Diri gave the directive on Tuesday while inaugurating the chairman’s new office complex at Ekeremor, headquarters of the local government area as part of legacy projects executed by council chairmen across the state.

The governor also appealed to the people to cooperate and support council chairmen to deliver on their mandate.

“Let me inform all those that would take over the leadership of the third tier of government that as the policy of this administration, all local government chairmen must stay in their respective domains.

“I appeal to the elders and all other stakeholders to support the local government administration to enable them perform their duties in line with the Nigerian Constitution.”

While commending the Ekeremor council chairman, Dr. Bertola Perekeme, for completing projects in all 12 wards in the area, Senator Diri underscored the need to execute people-oriented projects to reduce rural-urban migration.

“We are happy that our council chairmen are now performing. If you have electricity, potable water, good roads and other social amenities, there will be no need moving to urban areas.

“As a government, we will continue to do those things that will impact on people living in our communities.”

Responding to the requests of the chairman, Diri directed the Works and Infrastructure Commissioner, Moses Teibowei, to include the Ekeremor Secondary School in the next State Universal Education Board (SUBEB) contract award towards addressing its renovation and the twin problems of flooding and erosion threatening the institution.

He equally directed the Works Commissioner to ensure the award of contract for the construction of a pavilion at Ekeremor as well as a link road at Isampou community.

The governor also directed the Commissioner for Local Government, Chieftaincy Affairs and Community Development, Thompson Amule, to ensure the immediate and even disbursement of funds meant for the empowerment scheme across the 105 wards in the state irrespective of political affiliation.

In his address, chairman of the Ekeremor council, Dr. Bertola Perekeme, appreciated the state government for its supervision over the councils through the deputy governor’s office, which he said had raised the level of achievements in the council.

Dr. Perekeme noted that between August 2019 and February 2020, the Ekeremor council was only able to pay salaries through the benevolence of sister councils.

He said as a result of this, by February 2020, a total of N253.5 million was deducted at source to offset inherited debts.

According to him, due to the reforms in the local government system, Ekeremor has made savings of over N131.4 million after payment of statutory obligations in addition to the N90 million set aside for defraying debts incurred by the previous administration.

Perekeme equally noted that N15 million had been earmarked for payment of arrears of workers in 2016, assuring that payment would commence soon.

He also commended the state government for continuing the construction of the Sagbama-Ekeremor road inherited from his predecessor, Senator Seriake Dickson.

He recounted his achievements in the last three years to include completion and furnishing of the chairman’s new office complex, renovation of the Abenzi Dougha’s conference hall, construction of concrete pavement at Isampou community, furnishing of offices for Governor’s Special Representatives in Ekeremor as well as youth development centres among others.

The governor also inaugurated a skills acquisition centre at Toru-Orua community in neighboring Sagbama local government area where he lauded the council boss, Embeleakpo Alale, for his achievements in office.

In his address, Alale applauded Governor Diri’s passion for development of the state.

He added that although some projects had been inaugurated earlier, all the council chairmen were anxious to execute one or more projects before the end of their tenure on August 14.