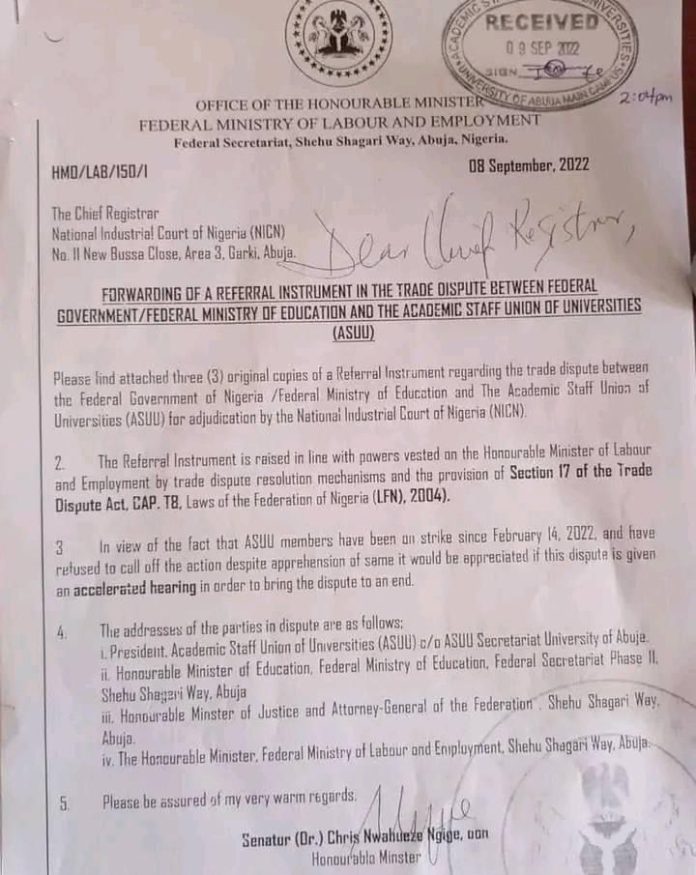 The Minister of Labour and Employment, Chris Ngige, has dragged the Academic Staff Union of Universities to the National Industrial Court of Nigeria, Abuja, over the prolonged strike of the union.

Ngige, in a leaked letter written to the Chief Registrar of the court, dated September 8, 2022, alleged the refusal of ASUU to call off its strike which began February 14, 2022, and thereby, asked the court to accelerate hearing on the matter in order to bring the dispute between the union and the government to an end.

The letter was titled, ‘Forwarding of a Referral Instrument in the Trade Dispute Between the FG/Federal Ministry of Education and ASUU.’

It partly read, “Please find attached three original copies of a Referral Instrument regarding the trade dispute between the FG /Federal Ministry of Education and ASUU for adjudication by the National Industrial Court of Nigeria.

“The Referral Instrument is raised in fine with powers vested in the Honourable Minister of Labour and Employment by trade dispute resolution mechanisms and the provision of Section 17 of the Trade Dispute Act. CAP. Laws of the Federation of Nigeria, 2004.

“In view of the fact that ASUU members have been on strike since February 14, 2022, and have refused to call off the action, it would be appreciated if this dispute is given an accelerated hearing in order to bring the dispute to an end.”