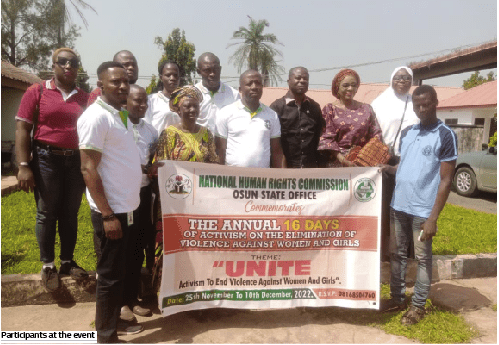 The National Human Rights Commission in Osun State has marked this year’s ‘Sixteen days of activism’ with the theme, ‘Unite! Activism to end violence against women and girls.’

Experts maintain that globally, there are increased reports of violence against women and the girl child exacerbated by the lockdown across the world to curb the spread of the COVID-19 pandemic.

Speaking at the official opening ceremony of the 16 days of activism at the office of wife of the former Governor of Osun State, Mrs. Kafayat Oyetola, the State Coordinator of NHRC, Idowu Akinsola, said that the Commission was inundated with several reports of violence against women and girls such as rape, domestic violence and other forms of harmful practices during the lockdown.

Akinsola said that “A total of 232 number of reports on sexual and gender-based violence was recorded by the Commission between March and June 2020 across the 36 states of Nigeria, including the Federal Capital Territory. These reports and the number recorded indicates that there is no one state that is immune from the global violence against women and girls.

“Women and girls experience various forms of Gender Based Violence notwithstanding the provision of the 1999 Constitution of the Federal Republic of Nigeria, pledging to protect, promote and enforce the rights of all, including women and girls, and the fact that Nigeria is party to the International Human Rights Treaties, including but not limited to CEDAW.

“These violations are perpetrated with impunity. Very few, if any, are held accountable for the violations or abuse. Survivors of SGBV fear to report to their families or law enforcement agencies because in most cases the alleged perpetrators are family members, neighbours, or persons who may engage in reprisals.

“Other concerns include social stigmatization from the community members and pressures from the family not to report the incident. Few cases are reported to the law enforcement agencies who either lack the necessary skills and capacity to investigate rape cases, are reluctant to conduct the investigations or blame the survivors for the acts perpetrated against them, thus forcing survivors to settle the matter out of court within families or that the alleged perpetrators are not adequately punished for the crime.”

He further said that “Violence against women and girls is a human rights violation that impacts on, and impedes progress in many areas of their lives, including poverty eradication (SDG 1), zero hunger (SDG 2), good health (SDG 3); education (SDG 4), gender equality (SDG 5) and peace and security (SDG 16).

“One of the main contributing factors to gender based violence is the deliberate misunderstanding of women and girls’ human rights, and the generalized society’s approval of cultural practices and attitudes that violate women and girls’ rights.

“Nigeria is a signatory to International Human Rights Instruments, including CEDAW, the Maputo Protocol for the Protection of the Rights of Women in Africa, aimed at protection the rights of women and girls in Africa, and at the national level, has passed the Violence Against Persons (Prohibition) Act, 2015, which has been replicated in some of the states.

“During the 16 days of activism, the Commission plans to engage in constructive advocacy for states to pass laws that will outlaw harmful practices against women and girls, make policies that seek to protect women and girls and take a stand against SGBV.”

Akinsola said that the Commission would continue to ensure that awareness is created among stakeholders in an effort to eliminate SGBV in the state.

In his remarks, Mrs. Oyetola commended the leadership of the NHRC in Osun State but lamented that gender disparity and violence were worsening in the country.

Represented by a former Special Adviser to the Governor, Office of the First Lady, Rotimi Ajayi, Mrs. Oyetola said that the problem of the fight against violence against women was not the absence of law but due to weak institution.

Ajayi said, “Gender disparity is worse in Nigeria. A policy item for NHRC is commendable and I want to say that the problem of Nigeria is not absence of law but us Nigerians. Our institution is weak and that’s why we have problems. The NHRC is in place to make things work.

“First ladies stepped up advocacies against rape that surged during pandemic. The fruit of this is the VAPP Act which is very comprehensive and needs to be domesticated. The first lady visited the House of Assembly and addressed the assembly on SGBV, which later brought about the VAPP Act.

“There are so many traditional practices that concern our women. They are at the receiving end of discrimination. A single mother was prevented from renting a house in Lagos because she was a single mother. That’s discrimination and should not happen. A case was referred to SARC on genital mutilation. It was so horrible. There is no way that a lady will have a child naturally.

“Consequences of FGM are huge. We should stand up and collectively wage war against gender violence and abuse. Our institutions should be developed.

“Activism should go beyond sensitisation and policies. It’s high time we lobbied the National Assembly to make NHRC arrest culprits of SGBV. All of us must sit together at our different levels and be mindful of each other. If we take corruption out, we are going to have a better country.”