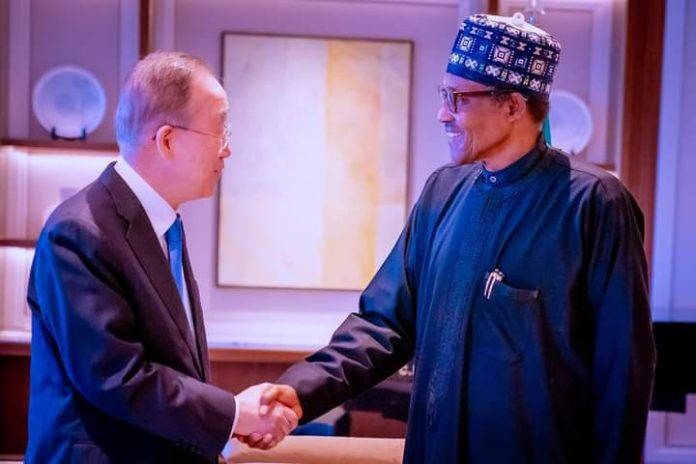 President Muhammadu Buhari on Tuesday in Seoul, South Korea, said that Nigeria was already experiencing the negative fallout of climate change seen in the flooding in different parts of the country, as well as encroaching desertification and drought from the northern part.

The President made this observation at an audience he granted the former United Nations Secretary-General, Ban Ki-Moon on the sidelines of the First World Bio Summit 2022.

The Nigerian leader expressed delight with the cooperation existing between his country and the Republic of Korea especially in the area of energy supply, citing gas exports to the Asian country.

Describing education as a key investment in addressing unemployment and underdevelopment, the President also noted that health challenges must be equally addressed.

On his part, the former Secretary-General, who is the Chair of Ban Ki-Moon Foundation for Better Future and strong advocate for Climate Change remediation, sympathized with President Buhari over the flooding, while calling for more investment to improve education, avert environmental degradation and preventive diseases in order to meet the core Sustainable Development Goals (SDGs).

He thanked President Buhari for attending the World Bio Summit, adding that his presence would highlight the importance of global action and cooperation in the development of vaccines and technology to meet the huge threat and challenges of pandemics.

Noting that Nigeria is a very important country having prominent citizens occupying sensitive positions in global organizations, Ban Ki-Moon called for more people-to-people engagements and cultural cooperation between both countries even as he sought Nigeria’s support in Korea’s bid to host an EXPO in 2030.

Speaking on his pet project, the ex-UN Scribe said his Global Centre on Adaptation is trying to mobilize resources to help developing countries fight climate change as he urged donor countries to fulfill their financial commitments to the Global Climate Fund.

President Buhari and his guest also discussed the role of gender equality towards attaining a prosperous society while calling for an end to the war in Ukraine.