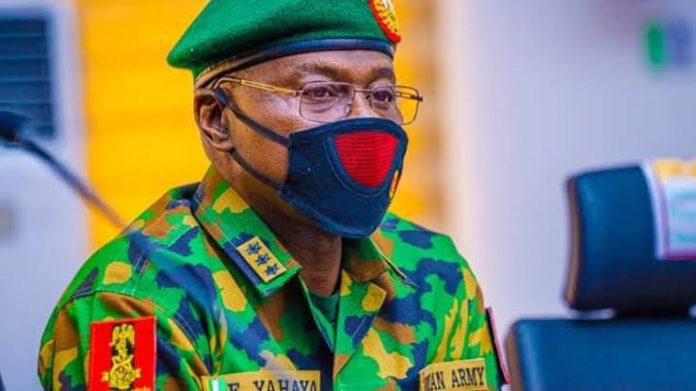 The Chief of Army Staff, Lt.-Gen. Faruk Yahaya has approved the redeployment of senior officers in an effort to ensure administrative and operational efficiency in the Nigerian Army.

The Director, Army Public Relations, Brig.-Gen. Onyema Nwachukwu, in a statement on Saturday, said the new postings and appointments was aimed at sustaining the recent operational successes recorded in combating emerging security challenges in the country.

Nwachukwu said that the officers affected are Major Generals and Brigadier Generals amongst several other senior officers across army formations and units.

He added that those affected in the redeployment include some Principal Staff Officers of the Army Headquarters, Corps Commanders, Commandants of Army Training Institutions, Brigade Commanders, Commanding officers and several others.

He said that Maj.-Gen. GM Mutkut had been appointed the GOC 8 Division and Commander Operation Hadarin Daji (OPHD) from Army Headquarters Department of Policy and Plan.

“Among the new Defence and Army Headquarters Principal Staff Officers are Maj.-Gen. Solomon Udounwa who is redeployed from Army Headquarters Department of Special Services and Programmes to Defence Headquaters as Chief of Defence Training and Operations.

Nwachukwu said that Brig.-Gen. TI Gusau has been appointed as Director of Defence Information while Brig.-Gen. AM Umar was appointed the new Commander of Guards Brigade.

“It is imperative to note that redeployment in the Nigerian Army is routine, particularly with the recent promotion of senior officers as approved by the Army Council for the year 2022.

“The redeployment of all appointees takes effect from January 11,” he added. (NAN)