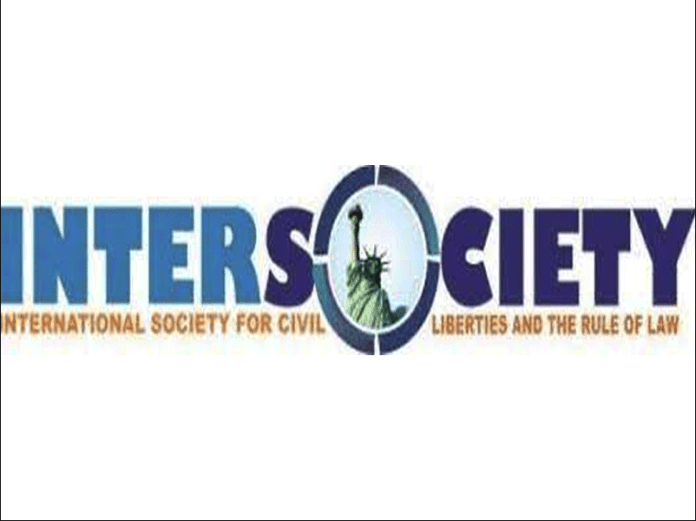 The International Society for Civil Liberties and Rule of Law, Intersociety, has raised the alarm over the dangers that the new postings announced by the authorities of the Nigerian Army may cause.

It alleged that the authorities of the Nigerian Army and the Presidency have continued to collapse the High Command cadre of the Army in the hands of Northerners particularly members of the Northern Muslim population; “thereby scornfully and magisterially treating the general and privileged populations of the country and the country’s civil and military spaces as if they permanently belong to a homogenous theocratic Islamic State.”

A statement issued on Sunday and signed by the board chairman of Intersociety, Emeka Umeagbalasi, expressed shock over the alleged lopsidedness in the postings saying, out of the 19 top officers posted, only three are Southern Christians while most of the remaining 16 are Northern Muslims.

“Intersociety is shocked at the Army’s latest lopsided postings involving Principal Staff Officers of the Army Headquarters, Corps Commanders, Commandants of Army Training Institutions, Brigade Commanders, Commanding officers and so on; whereby out of 19 top officers and their postings mentioned, only three are Southern Christians while most of the remaining 16 are Northern Muslims.

“It particularly saddens our heart that despite widespread public outcries in the East (South-East and South-South) against the flooding of the Region with senior Muslim officers and the high vulnerability of their crude soldiering in the Region to members of the defenseless civilian population and their properties, the authorities of the Nigerian Army have stopped at nothing by continuing to flood the Region with senior Northern Muslim officers. It is not only that no South-East officer from the rank of major general was among those in the new postings as a GOC, but another Northern Muslim Major General (Aminu S Chinade) has been posted to 82 Division, Enugu as GOC.

“Intersociety had recently investigated and found that all the not less than eight former GOCs of the 82 Division, Enugu between July 2015 and January 2023 are Muslims including seven Northern Muslims posted to the Division as GOCs in quick succession.

“It was also our finding that out of the Nigerian Army’s seven Brigade formations in the East; five are commanded by Northern Muslim officers.

Senior Northern Muslim officers also dominate the list of Army’s Divisions’ Principal Officers, Battalion, Artillery and Regiment Commanders and Commanding Officers in the South-East and South-South. Intersociety hereby demands for indigenization and allocation of posts of the GOCs of the 6 Division, Port Harcourt and the 82 Division, Enugu to senior Army officers from the East in line with Federal Character Act of 2004.

Such postings and their lopsidedness less than 45 days to the all-important 25th February 2023 presidential poll also constitute a major threat to the critical poll and an indication of the Nigerian Government and the Military’s bent on anointing their preferred candidate as “the next president of Nigeria.”

It said the development was unconstitutional, adding that, “the latest postings by the authorities of the Nigerian Army are unconstitutional, unlawful, dictatorial, vexatious, illegitimate and undemocratic. The postings were specifically done in total disregard to Section 217 (3) of the Constitution of the Federal Republic of Nigeria 1999 as amended.

The Section clearly states as follows: “the composition of the officer corps and other ranks of the Armed Forces of the Federation shall reflect the federal character (geopolitical balancing) of Nigeria. The postings were also done in grave violation of Section 219 of the Constitution and principles of indigenous involvement or participation by members of the country’s ethnic nationalities in the activities of the armed forces including senior and junior officers’ promotions and postings.

“Section 14 (3) of the 1999 Constitution was also observed in grave breach. By Section 14 (3): “the composition of the Government of the Federation or any of its agencies and conduct of its affairs shall be carried out in such a manner as to reflect the federal character (geopolitical balancing) of Nigeria and the need to promote national unity, and also to command national loyalty, thereby ensuring that there shall be no predominance of persons from a few States or a few ethnic or other sectional groups in that Government or any of its agencies.”

By Section 10 of the Constitution, observed in gross breach too: “The Government of the Federation shall not adopt any religion as State Religion”; and by Section 41: ‘discrimination of any form especially on the grounds of sex, ethnicity or place of birth in Nigeria and religion in conducting the affairs of the Government or any of its agencies including the Nigerian Army, is totally disallowed and prohibited.”