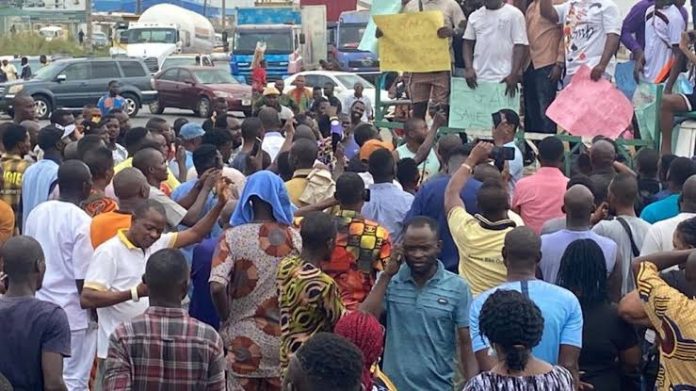 The National Association of Nigerian Students (NANS), on Tuesday, occupied the Lagos-Ibadan expressway in protest against failure of the Federal Government to address the ongoing strike embarked upon by the Academic Staff Union of Universities (ASUU).

The protesting students who wielded sticks and placards, on Tuesday morning, prevented motorists from plying the busy road.

Hundreds of commuters were stranded as traffic flow was paralysed.

After some minutes of blockage, a team of armed-policemen stormed the area and prevailed on the students to open up the road for motorists to move.

The protesters, at exactly 1:00pm opened up the road and moved to another location to continue their agitation.

Speaking during an interview at the scene of the protest, one of the protesters who identified himself as Comrade Olusegun, the Global Deputy Senate President of NANS, said Nigerian students were tired of idling at home at the detriment of their academic pursuits.

He urged the Federal Government to quickly resolve the issue with their lecturers and open their universities for academic activities.

Olusegun claimed the strike has made most undergraduates gone into taxi business to make ends meet while their female colleagues have taken to prostitution.

“We are here to let the federal government know that we are tired of their deliberate attempts to tamper with our future. Most of our male students are now cab drivers. Most female students are now into prostitution. We are tired and it’s a deliberate attempt of the Federal Government. Most of our leaders never schooled in Nigeria and those who did had free education and food but it’s unfortunate that they are now depriving us of education.

“I see no reason why the federal government should appoint Minister of Education who never believed in education and Minister of Labour who doesn’t possess the requisite criteria. This is the reason why we are here to let the world know that we can’t continue to tolerate this strike,” he added.

Recall that the NANS Southwest Zonal Coordinator, Emmanuel Olatunji Adegboye, had called on all students in the zone to join the protest. He urged students to gather at the Shagamu Interchange for the protest.

The statement had read ‘’For over six months, ASUU has been on strike, thereby paralysing academic activities on campus. Unfortunately, the Federal Government has been inconsiderate to the feelings of Nigerian students, which shows that the academic pursuit of students is of no relevance to this administration.

“Last week, a lecturer committed suicide all because of the failure of government to prioritise his wellbeing, leaving behind three children.

‘’It is based on the foregoing that we declare a protest against the prolonged ASUU strike, which has ultimately affected the progress of Nigerian students for the past six months. And, we also pass a vote of no confidence on the Minister of Labour, Chris Ngige and Minister of Education, Mallam Adamu Adamu.”