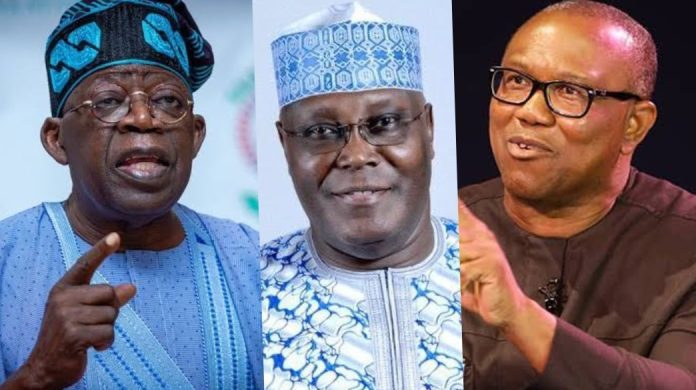 September 28, precisely nine days away, the major march towards the 2023 general elections will begin as the Independent National Electoral Commission will officially lift the embargo on campaigns.

Political parties and their candidates will have the opportunity to officially sell their manifesto to the teeming electorate.

The Presidential and National Assembly elections will be the major focal point as the two will usher in the much talked about elections. They will be held on February 25 while the Governorship and state’s House of Assembly will follow suit on March 11.

The political parties and their candidates, particularly the presidential candidates, have embarked on wide consultations that have taken them to all the nooks and crannies of the country and even beyond the shores of the continent of Africa ahead of the campaigns.

Of recent, a new political science has emerged in the country with various supporters of the three frontline presidential candidates; Atiku Abubakar, Peter Obi and Bola Ahmed Tinubu organising what they termed million-man-march to not only sensitize the electorates but to also showcase the level of support and followers their party and candidate have across the country.

Also, the candidates have been receiving a flood of invites to many associations including faith-based such as churches and mosques which triggered off a stern warning from the INEC, the reason being that campaigns are not allowed in churches and mosques.

While the campaigns are yet to officially start, the political parties have been at each other’s throats and the act is already creating a tense environment. Political and social analysts have warned that such acts will not do Nigerians any good and called the perpetrators to desist from it before campaigns begin.

Obi Okoye, a social critic and political analyst termed what is happening as a revolutionary approach to election which has never happened before in the history of Nigerian politics.

He said it is a serious indication that the voting populace is very much aware of what an election does to the kind of governance a nation has.

“The 2023 general elections will be completely different from the various ones we have had in this country. The awareness is very loud. The people, from the aged, ageing, youth, men and women even children who are not of voting age are talking about the election, particularly the presidential candidates. Wherever people gather, the topic is on Obi, Atiku and Tinubu. It has not been like this before. It’s a good omen to our political development, however, the managers of these political parties and presidential candidates, especially the three front runners must ensure their utterances in the forthcoming electioneering campaigns unite rather than divide the country.”

He also advised the principal actors. “The politicians must know that if there is no Nigeria there will not be political parties and posts not even to talk about elections. They must save us from sliding into anarchy by campaigning for their candidates on issues not whipping up religious and tribal sentiments. I’m saying this because the supporters of the three major candidates are already guilty of this.

INEC must wield the big stick to curtail it when the campaigns begin. They have regulatory power over the political parties in the conduct of the elections and I’m aware that it can sanction erring ones.”

“The politicians must know that if there is no Nigeria there will not be political parties and posts not even to talk about elections. They must save us from sliding into anarchy by campaigning for their candidates on issues not whipping up religious and tribal sentiments”

Speaking on the various trips the presidential candidates have embarked on in and outside the shores of the country since their emergence as their party’s standard bearer, Okoye said there is nothing wrong with that because it is part of sensitisation which has created the needed awareness and eliminated the usual voter apathy.

“There’s nothing wrong with Peter Obi travelling around the world to meet Nigerians, more so when it is honouring invitations from them. It doesn’t matter whether they are Diaspora Nigerians or not. Like it or not, the trips and meetings have taken our politics to another level. The interest created by these trips may not be visible now but subsequent elections will certainly benefit from it.

“It’s true the Diaspora Nigerians are not going to vote in the forthcoming elections but it is equally true that they are not only interested in the outcome, but they are also seriously monitoring the processes. What does that portend? Simple, Nigeria is returning to the position of giant of Africa because the whole world has been sensitised and as such the forthcoming elections are very sensitive to the country’s status globally and continentally.

“Yes, you can say Tinubu and Atiku are limiting their consultations to Nigerians in Nigeria. Let me make this clear, before the emergence of Peter Obi and his joining of the Labour Party, the ruling APC and opposition PDP had remained the elephant and hippopotamus of our politics and accept it or not, they are still the big two. So, they have nothing to prove because they have their areas of total control and that is statutory.

“However, they are working harder to retain and even improve on these areas by trying to expand their horizons. Recently, precisely last week, Tinubu visited Jigawa State where he donated N50 million to the state’s flood victims. Atiku has been involved in so many meetings trying to resolve the crises rocking the PDP. In all these, Tinubu and Atiku have set up their Campaign Council as a build-up to the campaign. So, you find out that the three of them are working hard to hold sway in the forthcoming elections and if they play according to the rules of the game and if INEC is not compromised alongside the security agencies, we will have the best election ever,” he said.

Ahmadu Musa, an Abuja-based businessman expressed concern with the manner the supporters of the leading presidential candidates are pursuing it even when the campaign has not started. He said they are at each other’s neck, de-marketing one another and wondered what happens when the campaign proper begins.

“The way the supporters of Tinubu, Atiku and Obi are going is worrisome. Campaign has not begun and they are de-marketing one another. My fear is that during the campaign proper they will leave issue-based and dwell on frivolities that will divide the country the more and this is not what we need this time around as we are battling many factors that have left us more divided than ever.

“This should not be a period of focusing on religion, tribe, or identifying a candidate with a social problem in his ethnic group rather what a candidate can offer to Nigeria if elected as our next President. We want to have the best election that will produce the best leadership for this country. I’m happy with the level of awareness among us as the youth. Nigeria is dying rapidly and our only hope is this election but we must not turn it to another thing because war is not good for anybody. My plea, therefore, is that politicians and supporters, whether PDP, APC or Labour Party must watch their activities during the campaign. They are not going to win by putting the country on fire.”

Musa argued that the role of INEC is what Nigerians should be concerned about as he insisted that only the Commission can make the election violent or violence-free. The national chairman of the Commission, Mahmood Yakubu, has consistently assured Nigerians and the international community of the Commission’s resolve to conduct a very free, fair, transparent and credible election.

He said there is no way the 2023 elections can be rigged and asked the registered voters to make sure they vote because their votes will count.

Yakubu also frowned at political parties using religious and tribal sentiments to woo votes warning the culprits to desist from such acts which he said runs afoul of Constitutional provisions.

A Group known as Enforcement of Credible Election in Nigeria has thrown its weight behind the INEC boss and is ready to give its all to make sure that parties and their candidates do not turn the forthcoming general elections into a matter of do or die but a would embrace peaceful campaign leading to the election where losers will congratulate winners and accept defeat without causing chaos.

ECEN spokesperson, Onyemere Geodora, said, ” We are aware that the electioneering campaign will kick off in the next few weeks, all the political parties are also aware that there are no-go areas while campaigning and believe they will play by the rules. Nigerians cannot accept unnecessary attacks on individuals in the name of a campaign, and so, we employ politicians to apply decorum no matter the level of provocations.

“With the height of insecurity in our country, we at ECEN are against any step by anybody or party to introduce more divisive tendencies in the name of campaigning for his or her candidate. By now, a lot is on ground for political parties to campaign with than hate speech which is capable of igniting fire that can consume all of us.

“We have no reason to doubt the sincerity and honesty of the INEC. The national chairman has, without distortion promised both the international communities and Nigerians that INEC he is leading will deliver elections that will be judged free, fair, transparent and credible in the end. But where our concern is, are the politicians, particularly the presidential candidates of the three leading parties and so, we beg them to play by the rules to ensure that there is life after the election.”

Meanwhile, the Labour Party’s standard bearer, Peter Obi and his running mate, Datti Baba-Ahmed have continued to forge ahead. They have always told Nigerians how prepared they have been to rebirth the country. In the several meetings between Obi and the Diaspora Nigerians, promises of supporting the former governor’s ambition by the Diaspora raised huge dust in the country leading to the threat of the nation’s Law Officer, Minister of Justice and Attorney General, Abubakar Malami, of invoking sections of the Constitution to arrest the Diaspora who pledged to contribute to LP Presidential Candidate’s campaign.