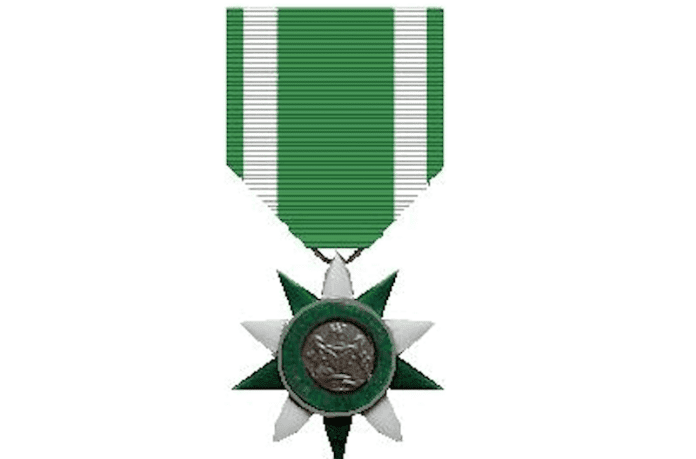 National Honours Awards are awards that are officially given to people for their contribution to national development. The award captures all activities of individuals adding value to the country in all spheres of human endeavor. The award extends to recognize citizens of other countries who have rendered service to the benefit of the nation. It consists of a set of orders and decorations which are conferred on worthy recipients on a yearly basis.

The National Honours was established by the National Honours Act CAP. N43 of the Laws of the Federation of Nigeria, 2004. The Act empowers the President to establish by Warrant the Nigerian Order of Dignity to honour deserving citizens who have contributed to the development and progress of the country as well as to any human field of endeavour.

The objective of National awards is to appreciate and reward the worthy contributions of the recipients to national goals and aspirations and to serve as motivation to others to pursue goals that would advance the country. Nigeria National Honours Award as established by the Honours Warrant of 1964 is in two major categories.

This year 2022, President Muhammadu Buhari GCFR, has graciously conferred National Honours on 447 people comprising 440 Nigerians and 7 foreigners. This is as contained in the official published list. We must thank the president for conferring the awards to deserving recipients.

“It is disgusting to note that many Nigerians who have abused their office and helped themselves with public funds hold national awards. A feature of the award that detracts from its nobility is that some of the awards are earned by reputation or as an entitlement”

I was particularly encouraged by the conferment of the prestigious award of GCON on Ms. Amina Jane Mohammed a Nigerian – British diplomat who is serving as the 5th Deputy Secretary General of the United Nations and Nigeria’s former Minister of Environment and Dr. Ngozi Okonjo – Iweala, the current Director General of the World Trade Organization. They are very deserving of the award.

While appreciating the recognition of the late Chief Anthony Enahoro for a posthumous award of CON one would be frank to say that the award is a little step down.

He deserves more. This political icon that moved the motion for Nigeria’s independence is one of the foremost nationalists Nigeria has produced. In the later part of his life he fought for the actualization of the June 12 mandate of Chief M.K.O Abiola with the last drop of his blood.

Prior to these awards, the President in this same year had awarded National Honours to Nigerian athletes like Ese Brume, Tobi Amusan, Blessing Okorodudu, Favour Ofili and others who acquainted themselves creditably in a World Sports Competition. Tobi Amusan set the world record in the female 100 metres hurdles at 12.12 seconds. Its implication is that since God created the heavens and the earth no female has recorded a better time on earth, so we don’t know about the heavens. Her OON award is therefore supremely deserved. Many have criticized the awards on many grounds.

They are of the view that the awards are most time bereft of integrity, undermined by favouritism and are awarded to people who have undermined our national pride and growth. In addition, many believe the awards could be bought by the rich and those in authority may bestow them on their cronies. This is in spite of the fact that a 15 – man Standing Committee screens deserving and distinguished citizens as well as friends of Nigeria for the nation’s honours.

How do you justify the exclusion from the list of Dr. Benard Olumuyiwa Aliu from Ikare – Akoko, Ondo State, who was the fifth and past President of the Council of the International Civil Aviation Organization (ICAO) in Ottawa, Canada? He did a lot for the Nigerian Aviation sector. He was for five years, 2014 – 2019, the number one Aviation personality in the world. He has been bestowed with numerous honours and awards globally for his achievements and contributions to the development of International Civil Aviation. The ICAO Museum was named after him.

It is disgusting to note that many Nigerians who have abused their office and helped themselves with public funds hold national awards. A feature of the award that detracts from its nobility is that some of the awards are earned by reputation or as entitlement. The award accrues to holders of certain positions automatically irrespective of the quality of service of the recipient. In many developing countries you can attain a position of authority which attracts awards by shooting your way to power through a coup d’état. It is because of these shortcomings that some distinguished Nigerians like Professor Chinua Achebe and Chief C. C.Onoh rejected their national awards.

Another drawback on the integrity of the awards is that it is a one – way traction. Once an award is conferred it is permanent and difficult to withdraw. Awardees go with their awards to the grave even if they compromised themselves after the award by stealing public funds running into billions of Naira.

I think we should take a cue from professional bodies like the Institute of Chartered Accountants of Nigeria and the Nigerian Medical Association and hold their members accountable for their professional actions. Members of these bodies who do things unethical will be disciplined and in some cases will have their certificates withdrawn and their names struck out of the membership register. This practice should be adopted to save the integrity of the Nigerian National Awards. It is advised that the selection process should be more transparent and participatory to bring out the best in the list of nominees. The list should be subjected to public review and criticism before the final list is drawn.