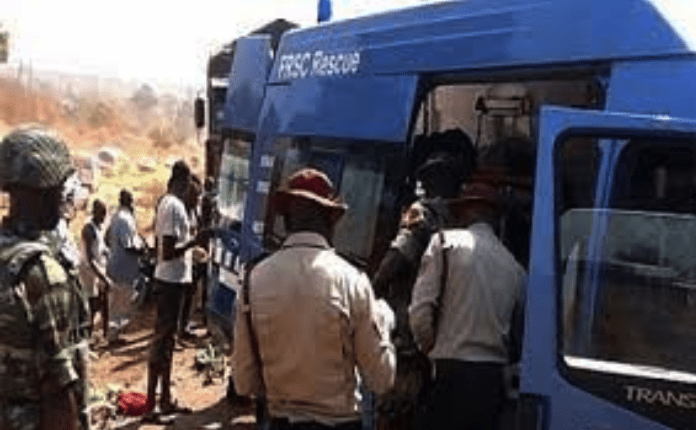 Nine persons have been confirmed dead and 10 others injured in a fatal crash at Yangoji-Abaji road, Federal Capital Territory Abuja.

The Corps Public Education Officer, Federal Road Safety Corps, Bisi Kazeem, confirmed this in a statement on Sunday in Abuja.

He said the bus was coming from Osun while heading to Katsina State, but unfortunately crashed into a stationary Trailer.

“Twenty-two people were involved in the crash. They were all males. Ten were injured and nine were killed. First aid was given to two.

“The rescue was a joint team of Zebra 6 Yangoji, Zebra 6, 16 Abaji and police. However, the injured victims were taken to general hospital, Abaji by zebra 16 and police on patrol.

“While the nine corpses were deposited at a mortuary in General Hospital, Kwali, Abuja and the Nigerian Police Force, Kwali division has taken over the investigation,” he said.

Kazeem quoted the Acting Corps Marshal, FRSC, Dauda Biu, as saying that the crash resulted from dangerous overtaking and eventual loss of control.

The Acting Corps Marshal stressed that crashes at night were more fatal than day time.

He reiterated that the corps would redouble its efforts by constantly engaging the motoring public nationwide.

This, he said, would be through aggressive awareness and sensitisation campaigns, until the desired result was achieved.

Biu advised vehicle owners to ensure that their vehicles were in order before putting them on the road, to avoid road crashes, especially at night.