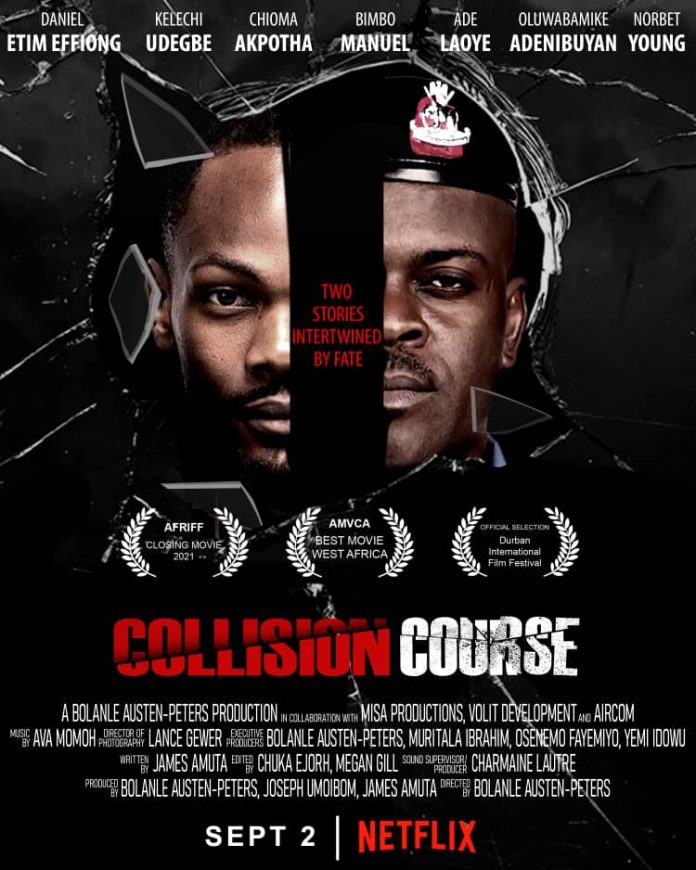 A strong cast of veteran and emerging Nollywood stars are the gems leading Bolanle Austen-Peters’ latest flick, Collision Course, unto its Netflix debut this week.

The 75-hour movie premieres on the popular streaming platform on Friday September 2, 2022 to global audiences.

Collision Course is a heart-thumping story told in 24 hours about the lives of a law enforcement agent and an aspiring musician.

It explores the seedy underbelly of rogue law enforcement officers and the painful as well as the atrocious results of their actions as they collide head-on with the struggling musician and the conflicted member of the police force.

Others that audiences will enjoy their beautiful characterisation include industry veterans like Norbert Young and Bimbo Manuel as well as Ade Laoye, Kenneth Okolie and Gregory Ojefua.

With echos of the October 2020 #endsars protests in Nigeria running through the film, Collision Course is a race against time in a haze of palpable tension. The producers of the film describe it as a powerful narrative compared to a powder keg tethering on the brink of imminent combustion.

The film had its Nigerian premiere last November as the closing film for the African International Film Festival (AFRIFF) where Udegbe picked up the award for Best Male Actor.

Collision Course also picked two out of the four awards in which it was nominated at last year’s African Movie Academy Awards.

It added to its feather earlier this year, the award for Best Film In West Africa at the Africa Magic Viewers Choice Awards, which held at the Eko hotels convention centre in Lagos, Nigeria.

Collision Course is Bolanle Austen-Peters’ third film on Netflix after The Bling Lagosians and The Man of God.