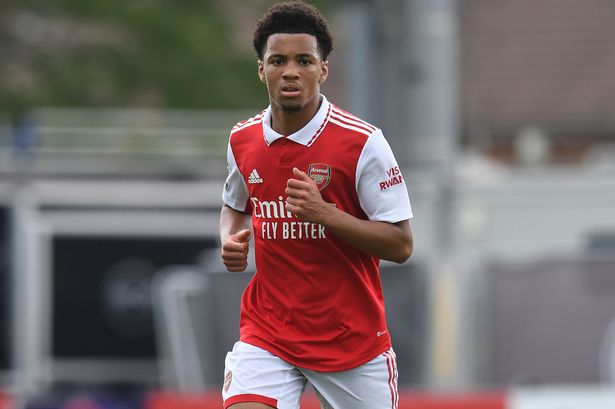 Liverpool icon John Barnes has insisted that Ethan Nwaneri is not in the same bracket as Lionel Messi and Cristiano Ronaldo when they broke into the Barcelona and Sporting Lisbon first team respectively.

The England U17 international of Nigerian descent made history last Sunday when he came on as a late substitute against Brentford.

Aged 15 years and 181 days, Nwaneri became the youngest player to feature for Arsenal’s first team in a competitive fixture and became the first 15-year-old to play in the English Premier League, breaking the record previously held by Harvey Elliot who was 16 years and 30 days old when he played for Fulham in May 2019.

In what has been deemed as a political decision by the Gunners hierarchy, manager Mikel Arteta handed a first team debut to Nwaneri amid speculation surrounding his future, with the likes of Chelsea, Manchester United and Liverpool among the clubs keeping tabs on his situation with a view to a possible move next year.

Barnes, who himself was an exciting young player back in the day, reckons that Nwaneri will not play on a regular basis for Arsenal’s first team like Messi and Ronaldo when they started.

Barnes said: “If you look at the future, the future looks bright for Arsenal in terms of a lot of the young players.

“Saka, you know, Martinelli, Odegaard. They’ve got a good, young team. But a 15-year-old being given his debut?

“You should leave him alone because of course, Theo Walcott made his debut at 16 and this young boy coming in is not going to be anywhere near Arsenal’s first team to be honest with you, when push comes to shove.

“It’s great for Arsenal to say we’ve got good young players coming through.

“But all of a sudden, I don’t want people to then put so much pressure on this young boy because he made his debut to say he should be playing all the time.

“It’s great for him and great for Arsenal for the future. I’m not saying it’s a gimmick because he’s good enough to obviously be playing but I don’t think it’s a situation whereby you’re looking at a Lionel Messi at 16 or Cristiano Ronaldo knowing that he’s going to go in the team and play every
week.

So it’s good news at Arsenal pushing their youngsters through but I don’t want to put pressure on this young boy and all of a sudden overemphasise that he should be playing this season or even next season.”

Nwaneri is currently on England U17 duty and helped the Young Lions thrash Czech Republic 3-0 in their opening game of the Syrenka Cup on Friday.