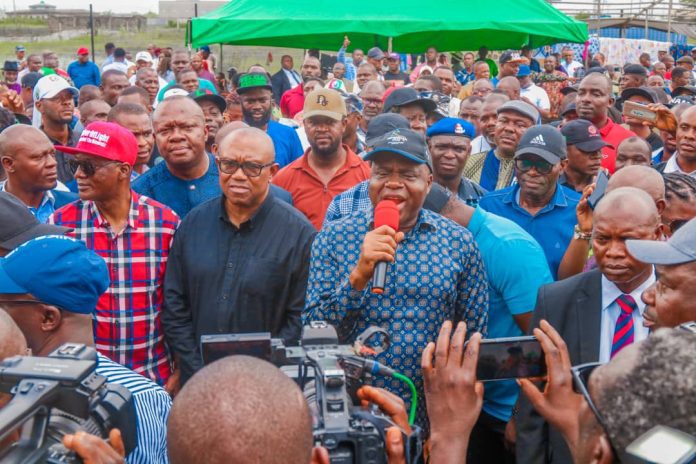 Governor Douye Diri of Bayelsa State today received the former Governor of Anambra State and Presidential Candidate of Labour Party, Peter Obi, who is on a solidarity visit to the state over the ravaging flood.

The Governor thanked Obi for his show of support and urged other well-meaning organisations and individuals to join the State Government in providing succour to the flood victims.

Obi who came into Yenagoa with a chopper was received at the Government House before proceeding to the IDP camp at Ox-Bow lake to identify with the victims.

“I came in through the air and I saw the impact of the flood. I have been to other places, and I have never seen this kind of destruction. The Federal Government needs to declare an emergency in Bayelsa State. No State can cope with such a disaster on its own. I also appeal to the international community and donor agencies to support the affected states. Here in Bayelsa, we need help. This destruction is unimaginable.”

Obi said he was in Yenagoa to offer his sympathy and support to the state government and the victims of the ravaging flood.

The Governor received Obi in the company of the Deputy Governor, Lawrence Ewhrudjakpo, Deputy Speaker of, the State House of Assembly, Michael Ogbere, other state lawmakers, commissioners and other top government functionaries.