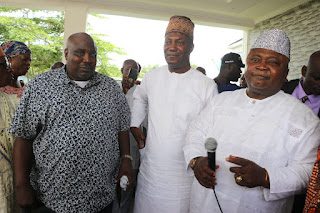 A member of the Ogun State House of Assembly, Dare Kadiri, has declared that despite being a member of the ruling All Progressives Congress, he will not support the re-election bid of Governor Dapo Abiodun in 2023.

Kadiri, a former Deputy Speaker of the Ogun State House of Assembly made this declaration on Sunday when the state People’s Democratic Party governorship candidate, Oladipupo Adebutu, paid him a courtesy visit at his residence in Ago-Iwoye, Ijebu North Local Government Area of the state.

Adebutu, who was accompanied by some PDP chieftains, apparently stormed the lawmaker’s residence to woo him and his supporters ahead of next year’s gubernatorial election in the state.

Kadiri, representing Ijebu North II State Constituency, was the Deputy Speaker of the House of Assembly until he was impeached in March 2021 over alleged gross misconduct. Speaking during the visit, Kadiri, said his opposition to Governor Abiodun’s re-election was in the best interest of his constituency.

The lawmaker explained that though he remained in the APC, he would partner with any candidate among opposition parties that is sincerely prepared to engender good governance and accommodate the collective interests of his people.

He claimed that despite working for the emergence of the incumbent governor, his constituency has been marginalized in terms of political appointments, projects and other dividends of democracy.

He also accused Abiodun of failing to properly handle the crisis rocking the state APC, noting that a lot of party members were currently disgruntled and disaffected by the governor’s leadership style.

Kadiri said, “The main concern of everybody is about the progress of Ogun State and to have a better and much desired Ogun State. The consideration should not be about party but about credible personality like what we have in Ladi Adebutu. This is a person that is not controversial. His certificate is not controversial. He was never involved in any scandal.

“Anybody that is hiding something will have a lot of things to cover up. I will not support Governor Dapo.

“I have seen and read a lot of things on the social media that we are decamping. No, we are not decamping. Concerning the issue on ground, party doesn’t really matter now. We want to look at personality because this is about the collective interest of Ogun State.”

On his part, Adebutu said the people of the state have another opportunity in 2023 to correct the mistake they made in electing the Abiodun-led administration in 2019.

The PDP candidate argued that the governor had performed poorly and lowered the bar of governance over the last three years, stressing that well-meaning people across party lines must work together to salvage the state.

He accused Abiodun of abandoning township and rural roads across the state, adding that grassroots development had also suffered severely under his administration.

“There is nothing wrong for somebody to make mistake. But if one makes mistake, one should be ready to correct it. This is a golden opportunity to correct our mistake. The people of Ogun State must correct their mistake and elect a new governor in 2023.”

The governorship candidate noted that when electioneering campaign begins, his party would roll out the poor scorecard of the APC administration.