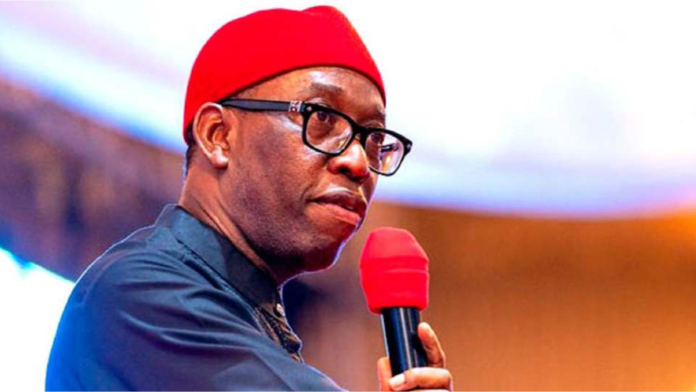 Delta Governor and Vice-Presidential Candidate of the Peoples Democratic Party (PDP), Senator Ifeanyi Okowa, on Thursday, called for improved condition of service for healthcare professionals so as to discourage their migration from the country in search of greener pastures.

Okowa made the call when he received members of the Committee of Chief Medical Directors and Medical Directors of Federal Tertiary Institutions in Nigeria led by Prof. Abubakar Auwal who visited him at Government House, Asaba.

He lamented the exodus of medical doctors and nurses from the country in search of greener pastures, and said that healthcare professionals should be provided with facilities to enable them discharge their duties as a way of halting brain drain in the country.

According to him, the federal and sub-national governments should do the needful by prioritising healthcare delivery through deliberate policy framework that would enable the country to retain its healthcare professionals.

The governor said federal and state governments should place high premium on the healthcare needs of the masses, their education and welfare scheme as a veritable means of enhancing their living standard.

“Every visionary government must take proactive steps aimed at providing qualitative and affordable healthcare delivery system that will take care of the vulnerable segment of the society.

“I am glad that you have a strong committee, especially in the current times that we are in with lots of issues in our nation. I believe that your work is not easy and you realise the challenges we face in medical institutions.

“So, I believe that when you continue to sit together, you will be able to proffer solutions to issues, share ideas as to what to do to help this country at this time when it appears that things are going wrong in every facet.

“I truly want to let you know that we have had a very strong relationship with the Federal Medical Center, Asaba. I know that they did carry a lot of load.

While reiterating the need for government to improve the condition of service for doctors and other health personnel, the governor noted that their exit, if not checked, will culminate in loss of capable hands to render critical medical services to patients.

He disclosed that the contributory health insurance scheme of his administration had no fewer than one million enrollees, including pregnant women and children under five years of age, with the government paying premium for their healthcare services.

“With a lot of our people below the poverty line, the greatest service you can do to touch their lives, is to ensure that we provide a process through which they can stay healthy and also ensure that their children are educated.

“Unfortunately, our priorities do not seem to be taken in the right direction. I believe that there are so many policies that we undertake in this nation that is anti-poor.

“Most times, we tend to undertake policies that impact more positively on the middle class and the rich and erroneously, we belive that we are touching the lives of the poor.

“Most poor persons are not able to see their children through school nor access healthcare. And many times we talk about health tourism and how to curb it, when we should first talk about the foundation of the health of our people, which is the primary health care.

“When people have functional primary health care centres, we can now progress to the issues of secondary health care institutions. The foundation is nearly lost and it is not the best for our nation.

“The National Health Act was signed into law in 2014, have we really implemented that Act by trying to do the things we ought to do?

“In this country, a lot of persons are getting poorer by the day. We have not created opportunity for people to have access to good healthcare. Many people still self-medicate and many die in the course of that.

“So, we need to find way to revisit the entire process and rework our health delivery system in such a way that it works.

“We have included in our National Health Act, the basic healthcare provision fund. It has been very sloppy the way they try to work out the operations.

“I am aware that they only released monies for one or two years and that is all, every other thing has not been done.

“I am one person that believes that if we try that process, with the seed money there, encouraging the state government with the collaborations of the local government, we can truly go very far in providing basic health care for all our vulnerables for a cost that is low.

“We can ensure that a lot of our people are able to access health care, without having to pay out of their pockets at that point in time of their need. We need to implement the National Health Act in full,” he added.

Other areas of necessity Okowa stressed include education, security, job creation and human capital development, and described as unfortunate, the eight months industrial action by Academic Staff Union of Universities (ASUU) that had kept students at home.

He said that the four universities owned by the state had been in session because his administration understood the importance of education and provided adequately for the institutions and the personnel.

He, therefore, urged the Federal Government to do the needful so that the union’s strike would be called off to enable students resume studies.

“Coming to the education of our people, it is unfortunate to see that our children in higher institutions have been out of school for eight months now. No matter the situation, it ought not to be so.

“We need to find a solution on both sides because the children and their parents are suffering. We have four Universities in Delta because of the huge educational gap in the state before now. So, we have to upgrade some institutions to university.

“We did this because we have prioritised education and know the importance of education. If we educate our people, we are actually helping to lift them out of poverty,” Okowa stated.

He assured that the state government would continue to ensure that education was given the prime attention that it deserved.

He charged medical directors to fashion out ways of expanding access to healthcare services both in urban and rural communities.

Earlier, leader of the team, Prof. Auwal had said that they were in the state for their meeting, and thanked Governor Okowa for prioritising healthcare delivery for residents of the state and his giant strides in other sectors of the state’s economy.

He called on other sub-national governments in the country to emulate Okowa’s developmental policies and programmes.

Auwal observed that the collaboration between Federal Medical Centre (FMC), Asaba and the Delta State Government had significantly helped in reducing the burden of healthcare delivery services.

He noted that the free medical care for pregnant women and children under five years of age in Delta State was a model for other states to emulate, adding that the healthcare policy was a right step in them right direction.

While pledging the readiness of the Committee towards improved healthcare delivery in the country, Prof. Auwal called on government at all levels to assist in making healthcare services available and affordable for the masses.