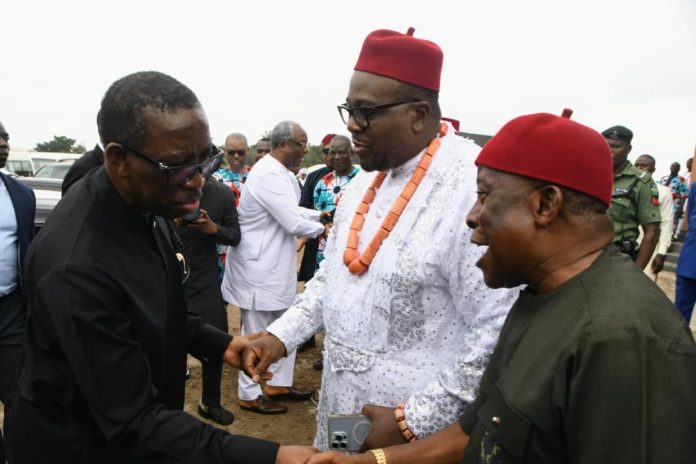 Delta State Governor and Vice-Presidential Candidate of the Peoples Democratic Party (PDP), Sen. Ifeanyi Okowa, has deplored the rising insecurity in Nigeria, saying the country was better secured in the past.

Okowa, who spoke at the funeral mass in honour of late Senator Patrick Osakwe at St. Augustine’s Catholic Church, Ugiliamai, Ndokwa West Local Government Area of the State, said Nigeria was a better country when PDP held sway at the centre.

Recalling his political engagements with the late Osakwe, Okowa said he used to travel at nights to visit him and returned same night without anything to worry about as far as security was concerned.

He regretted that Nigerians were no longer safe to travel in the day time talkless of embarking on night travels.

“I remember in those days when I was the Director-General of his ( Senator Osakwe) campaign organisation, I use to leave Asaba at 1a.m. and arrive Ugiliamai at about 2a.m.

“I will finish discussions with him and leave again same night either back to Asaba or Boji-Boji Agbor. Those were the good old days when we could move around without fear,” he said.

The governor extolled the deceased for his outstanding accomplishments at the Senate and for his contributions to the growth and development of his Senatorial District and Delta in general.

He urged the family and followers of the late senator to trust in God and take solace in the fact that their patriarch lived a life of great accomplishments as an astute businessman and politician of repute.

“We have come here, though we mourn, but to celebrate not just a true son of Ugiliamai or Ndokwa nation but of Delta state and Nigeria.

“We know that our departed father and brother, Sen. Patrick Osakwe is a household name in our nation Nigeria.

“As a little boy, I heard about him because he truly worked very hard and he started from a humble beginning but rose in hardwork to the top.

“We are told of his exploits in business and his philanthropy to people. We know about the things he has done here and in Delta State.

“When he was to run for the office of the Senator representing Delta North Senatorial District, I was the Director-General of his Campaign.

“He was a great politician and even ran election under another party and still won landslide.

“God knows why he has chosen to take him at this time that we all need him, especially, his immediate family. He was a father figure to a lot of people politically.

“Having done 12 years in active political service for the people of Delta North, he willingly stepped aside because he thought I should run for the Senate at that time.

“It takes a strong politician to run for elections and win three times. Senator Osakwe had very difficult and turbulent primaries but he still won landslide and that is the hallmark of great men.

“As friends of the late Senator, we know that he has played his role very well and it is time for us to truly thank God because he came and made positive impact on humanity.

“He lived his life not just for humanity but also to the glory of God,” Okowa stated.

Earlier in his homily, Rev’d Father Barnabas Esegine described the late Senator Osakwe as an enigma who didn’t live for himself but for others.

He urged Christians to live their life with eternity in view, adding that the late Senator Osakwe would be remembered for the lasting legacies he built for God and humanity.