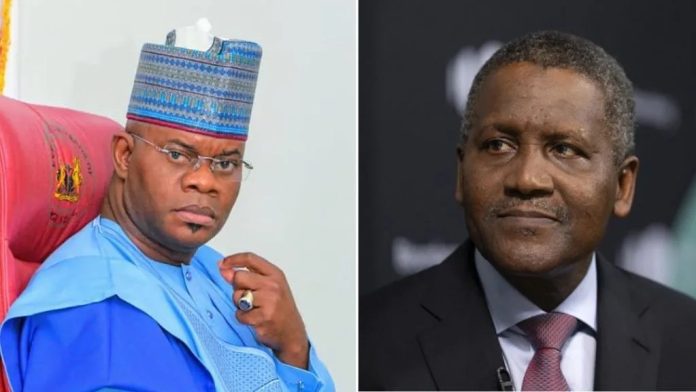 The complaints of late Prince Abubakar

When I was the 2011 ANPP Deputy Governor candidate to the late Prince Abubakar Audu, I heard my beloved principal complaining about the non-compliance of the Dangote Cement to the agreement reached with the Kogi State government.

I can vividly remember just a few of his complaints: (i) a certain cadre of workers should be reserved for only Kogi indigenes (ii) a reasonable percentage of senior positions were to be occupied by Kogites who possess the necessary qualifications (iii) a Kogite was to serve as a director of the company representing the state.

He promised that he would make sure the anomalies, among others, were corrected if he came back as the state governor.

However, I did not ask him whether these observed anomalies started during or after the period he served as the governor.

MY RESEARCH ABOUT DANGOTE CEMENT

Many years ago, as a UK postgraduate student in Cardiff studying management, I did research about the Dangote conglomerate to make a class presentation as part of an assignment.

I found out that Obajana Cement made Aliko Dangote the richest man in Africa and it is the foundation of his fame as a world business leader.

It is a world-class business enterprise in a pauperized environment where the local communities lack the basic necessities of life, in addition to being exposed to environmental pollution and degradation. I do not know whether the company is now alive to its corporate social responsibilities to the host communities.

Debates are going on about the propriety of sealing off the company, which according to the press propaganda is mainly because of tax evasion.

The state government in their explanation went deeper to question the validity of Dangote’s ownership claim to the cement factory.

As a lawyer (not a Barrister) with an LLM degree in commercial law, a contractual agreement, as in this instance, automatically becomes null and void, when the main beneficiary party to the agreement breaches the contractual terms/preconditions especially when the terms are the pillars of the agreement unless, of course, the agreement contains specific penalties in case of a breach.

If the allegations levied against Dangote by the State government and the late Prince Abubakar Audu are correct, then, it is as good that no contract ever existed between Dangote and the State government, hence, the automatic reversal to the status quo i.e Kogi State government became the bona fide complete owner of the factory starting from the date the breach took place. To buttress the point, it is alleged that the transfer instrument of ownership is not recognised in law and by law.

From the perspective of the analysis, I believe the state government has taken the right step to recover the commonwealth of the people.

Those critics blaming the government for sealing off the company should have concentrated on the legality of such action.

Is the state government empowered by law to take such action or not? If the answer is yes, then, why the hullabaloo?

Some people may argue that all is not about legality, sometimes one has to consider the economic benefits the company brings to the host communities and the state.

To me, the closure of the factory has the combined advantages of being a potent political and legal tool of approach that touches the business nerve centre of the company which will compel it to seek immediate remedy to the stalemate. The purported crumbles the host communities touted to receive from Dangote cannot and should not serve as an alibi for the alleged continued exploitation of the state and the people.

MY ADVICE TO DANGOTE COMPANY

To permanently resolve the issue once and for all, I advise Dangote Company to approach the law court if they are convinced their actions so far are in tandem with the agreement.

You are obviously not pleased with the sealing of the factory because you believe the state government took the law into its own hands instead of going to the law court for redress.

That is the very logic that must dissuade you from engaging in any mass action that can lead to the breakdown of peace and order in the state.

You cannot forcefully reopen the factory if the law empowers the state government to seal it off under certain conditions recognized by law. If you have enough facts at your disposal, you can take criminal actions against individuals for the alleged injuries sustained by your workers and civil action against the state government to reopen your factory and also claim damages.

MY ADVICE TO KOGI STATE GOVERNMENT
Further steps should be taken to (a) set up a Judicial Commission of Inquiry to dissect the instrument of transfer of ownership of the factory to Dangote, with particular reference to it its propriety, legality, terms-compliance by Dangote, and any acts of collusion by any past and present government officials bordering on corruption, and then for the commission to make the necessary recommendations based on justice and fairness to all the parties to the agreement.

The factory should be recovered without fear or favour if the outcome of the inquiry so demands. Anyone no matter how highly placed, in any administration found to have gained from the deals, if any, should be made to refund the assets and monies in addition to being criminally prosecuted. CAN YOU DO THIS??

Finally, I wish to state that I am not a fan of the governor because of his style of administration which is not poor people orientated. So many pensioners have died of starvation and preventable diseases. Epileptic and small percentage payment of salaries has significantly contributed to peoples’ misery and untimely death.

He may argue that the problem is mainly concentrated at the local government level. BUT WHO IS THE GOVERNOR OF THE STATE? However, I will not fail to mention some of his landmark projects like the hospitals, roads, and the establishment of the new university and say kudos to him.

Whether the few projects are enough testimonies of achievement, given the huge income that has accrued to the state in the last 7 years is another issue for debate!

BUT ON THIS DANGOTE ISSUE, I COMMEND AND BLESS THE GOVERNOR FOR THE BOLD STEP BECAUSE MY POSITION ON ISSUES IS ALWAYS DEFINED BY PRINCIPLES AND NOT SENTIMENTS.

I have never and will never be a hypocritical praise singer of anyone in government. I will say it loud and clear that I am not seeking and will not seek any favour from the governor. I will continue to objectively speak the truth as I see or perceive it for the good of the public, especially the voiceless ones. Nigerian politicians are known for hyping for personal gains.

I hope the cause and course the governor has taken on this matter will be JUSTLY and TRANSPARENTLY concluded, and not abandoned in limbo as typical of the Nigerian leaders after possible unholy under-hand exchanges as some people are already predicting.

For integrity purposes, the governor needs to keep the public abreast of the developments in a transparent way till the matter is satisfactorily resolved.

What is the ultimate is getting JUSTICE irrespective of whichever party it favours, Dangote or the state. A peaceful and progressive society is founded on the rule of law and NOT on the might of a few people. Nigeria should abandon the destructive way to embrace a new paradigm! GOD bless you all in Christ Jesus!

Dr. Moses Wokii is a multi-disciplinary professional based in the UK.