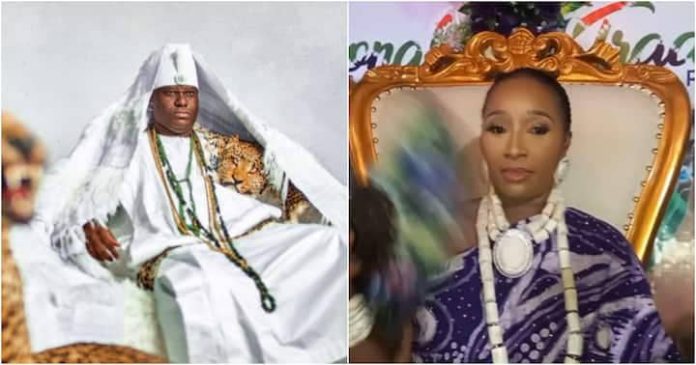 The traditional wedding was held at the palace and it came five days after the royal father tied the nuptial knot with his fourth wife, Princess Ashley Adegoke.

In videos making rounds, the beautiful bride could be seen entering the hall in grand style as the Ooni’s chiefs asked for her hand in marriage, on behalf of Oba Ogunwusi.

Just like his previous weddings, the Ooni was not present at the ceremony. He was represented by the royal guards, maids, palace chiefs and royal staff.

His marriage to Princess Aderonke took place on October 15, 2022.

The 5th queen is said to be a princess, who is influential and financially buoyant like Olori Mariam.

The new queen is said to be in her early 50s and she owns the African fashion show, London.

It was gathered that Princess Ademiluyi has known the king before he ascended the throne in 2015.

The London-trained lawyer is a very well-known entrepreneur who shuttled between the UK and Nigeria, among other things.

The Point gathered that the monarch is set to marry his sixth wife, Princess Temitope Adesegun, in few days time.