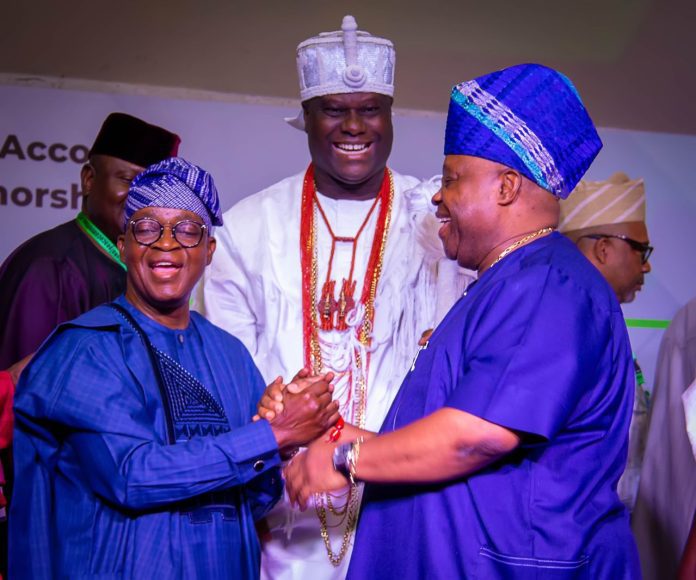 Ooni of Ife, Adeyeye Enitan Ogunwusi has congratulated candidate of the Peoples Democratic Party in the just concluded gubernatorial election in Osun State, Ademola Adeleke on his triumph at the poll and admonished him to shun vendetta that is capable of making him lose focus on his plans for the state.

The monarch urged the governor-elect to “carry everybody on board as a people’s leader who has no time for any vendetta that will make him lose focus on his plans for the state and who will not patronise the sycophantic behaviours of hypocrites who may want to selfishly misadvise him pretending to be his best loyalists.”

In a statement by his Director of Media & Public Affairs, Moses Olafare on Tuesday, the traditional ruler described the election result as a confirmation of Adeleke’s grassroot popularity in the state which he must reward with good governance driven by rule of law, fear of God and selfless service to the people.

He said: “Senator Ademola Adeleke has been around for some time and his eventual victory is an opportunity for him to execute his election promises as much as possible. The Arole Oodua urges him to be magnanimous in victory and justify the mandate of our people which confirms his grassroot popularity by ensuring that Osun indigenes enjoy maximum dividends of democracy and good governance driven by rule of law, fear of God and selfless service to the people.”

“Mr Governor-Elect is from a noble family and a strong political dynasty in the state who must avoid to be misled by hypocrisy and sycophancy of some arrogant political lieutenants who may want to instigate him against merely perceived political enemies both in his party and in the opposition parties. Vendetta is capable of derailing a leader.”

Ooni, the Permanent Chairman, Osun State Council of Obas and Co-chairman, National Council of Traditional Rulers of Nigeria (NCTRN), equally hailed the state governor, Alhaji Isiaka Oyetola for his peace loving character with which he comported himself before, during and after the election, describing him as a perfect gentleman of peace who kept his promise made recently at the peace accord meeting that he was not going to act as a desperate politician but would only remain as a simple political leader in all ramifications.

“During the Peace Accord Ceremony organised by the National Peace Committee few days to the election in Osogbo attended by traditional rulers led by the Ooni, civil societies, INEC officials led by the Chairman, heads of security agencies and other peace stakeholders from across the country, Governor Oyetola signed the peace accord alongside 12 other contestants and he made a promise to conduct himself peacefully before, during and after the election in a character of a gentleman and a simple leader in all ramifications. This he has done to the admiration of the traditional rulers and he must be well commended.”

Ooni also praised the Osun electorate who went out on Saturday peacefully with their usual virtuous ‘Omoluwabi’ decorum and voted for their different preferred candidates without setting the state on fire which would have posed serious challenges to be managed by security agencies and traditional rulers.

Ooni Ogunwusi in the conclusive part of the statement lauded the Independent National Electoral Commission (INEC) over what he described as a job well done.