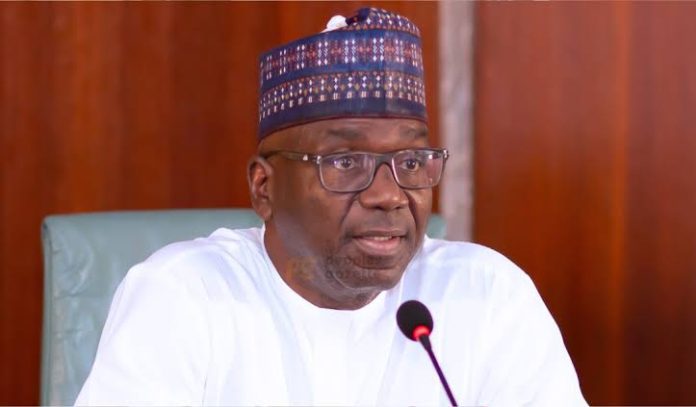 Kwara State Governor AbdulRahman AbdulRazaq has said the 11.1km Osi-Obbo-Aiyegunle road will be delivered this year — a feat monarchs and community leaders say is a dream come true in 50 years.

Already, the travel time on the border road has gone from 45-minute excruciating journey to barely 10-minute drive.

The Governor said the work on the road is in fulfilment of his campaign promise to the people.

AbdulRazaq was speaking at Obbo-Aiyegunle Day in Ekiti Local Government Area where he bagged the title of Jagunmolu Atayero of Obbo-Aiyegunle.

Followed by a retinue of aides and party leaders, the Governor had earlier held a town hall in Osi town for the people of Oke Ero and Ekiti Local Government Areas — the fourth in the series.

He also said the government will soon deliver the Osi Campus of the State University ahead of next year’s academic session.

He also promised his government’s relentless efforts to enhance the people’s access to adequate presence of basic amenities, and find a lasting solution to their security challenges.

“Our coming here today is to hear from you what you still want the government to do for you. We knew we have done some, and we did them without seeing you because we knew they are important. It is so far so good. Glory be to God,” he said to the applause of the people.

“It is no longer news that the government is constructing KWASU’s Campus in Osi, the school campus will begin academic session next year, by the special grace of God. And in few years to come it will translate to a full-fledged institution of learning,” he added.

AbdulRazaq said the routine security sweep of the axis by conventional government forces will continue while the government also enlists the support of local security architecture, including the traditional rulers.

Fagbemi, for his part, said the people of Oke Ero and Ekiti will reward the administration with huge votes for the infrastructural projects in the two local governments and the appointments of their sons and daughters into key offices.

He called it a unique development in the history of the towns.

Senator Ashiru said the AbdulRazaq administration prioritises the interests of Kwara Southerners and needed to be compensated with massive votes to consolidate on the gains, noting one good turn deserves another.

Commissioner for Works Rotimi Iliasu listed Koro/Egbe; Osi/Isare-Opin; Obo-Ile/Ora and Eruku/Iyemero, among other road projects, that the administration was ready to construct under the Rural Access Agricultural Marketing Projects.

He also mentioned the Osi township road and Idofin Igbana road as some of the achievements of the government in the axis.

Chairman Kwara SUBEB, Raheem Sheu Adaramaja, said both Ekiti and Oke-Ero LGs got a total of 427 teachers of primary and secondary schools under the SUBEB/TESCOM teachers recruitment exercise in 2021, while several schools have also been renovated or remodelled across the two local governments.

General Manager KWASSIP AbdulQuowiyu Olododo said a total of 2,385 people of Ekiti and Oke-Ero benefited from the government’s social safety programme (Owo Arugbo and Owo Isowo) between year 2020 and 2022.

Representative of Osi Community Michael Adewumi thanked AbdulRazaq for responding to their own infrastructural needs like roads and electricity, and pledged to work for a continuity of what he called people-focused government.

“We have seen your good job all around unlike what we had before. It is in your administration that every community counts in terms of access to projects, without necessarily lobbying or knowing anybody in government,” said the Owa L’Obbo.

Obajisun of Ilu Aiyedun Olufemi Rotimi, while speaking for Oke-Ero royal fathers, said: “There is no ward in Oke-Ero that your administration has not touched in terms of developmental projects. We are grateful for that. The only thing we lack in Oke-Ero and Ekiti is the Federal Government’s presence. Apart from that you have done very well. And we pray God to grant your second term bid.”