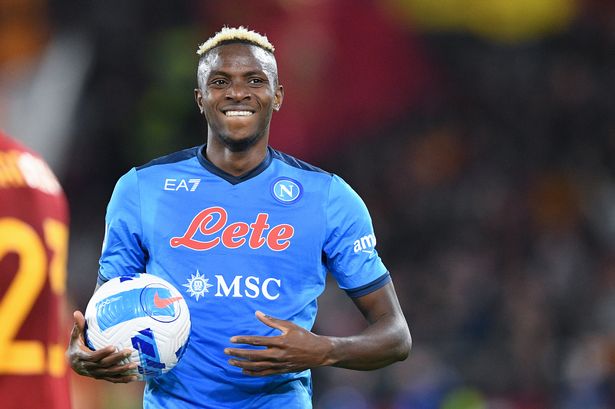 Super Eagles star performer Victor Osimhen has been involved in several transfer talks this off season with concerted interests reported from the Premier League but every move seems stalled as he hopes on a miracle to happen in his career going forward.

With the exit of Kalidou Koulibaly and a host of other top Napoli stars, Osimhen must be fervently thinking of his future and the next steps to take.

However, Osimhen revealed at the weekend where he’s placing his faith in his career and life’s journey.

Arsenal, Chelsea, Manchester United and Newcastle have all been reported as potential destinations for the former Lille man. But nothing concrete has been met.

The Nigeria international has reported for pre-season training despite speculation linking him with a departure from The Azzurri. He scored on Thursday for the Neapolitans in their 10-0 preseason win.

Napoli began their pre-season friendlies with a goal fest as the Italian Serie A side demolished Anaune Val di Non.

Luciano Spalletti’s men reached double figures, scoring ten without reply. And Napoli’s record acquisition Victor Osimhen picked up where he left off last season with a goal in the 68th minute.

And the Teranga Lions of Senegal’s captain has already announced his departure from Napoli, where he spent the last eight years of his career after transferring from Racing Genk.

Koulibaly was worshipped at Napoli and was deemed non-transferable. But with the centre-back in the last year of his contract, The Parthenopean were forced to accept a bid in the region of 40 million euros for the French-born defender.

Osimhen was linked with a plethora of Premier League clubs in his final season at Lille. But it was Koulibaly that convinced the Nigerian to choose Napoli over his other suitors. And the Super Eagles star looks destined to join the Senegalese in the Premier League in future.

In an emotional statement on Instagram on Friday, Koulibaly confirmed his departure from Napoli, adding that it was time to move on and time for a new adventure.