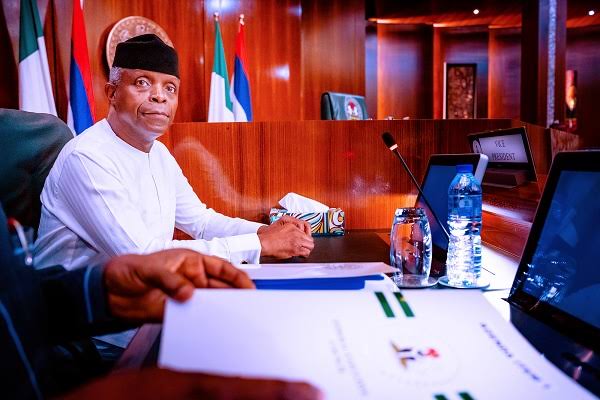 Vice President Yemi Osinbajo on Wednesday presided over the first Federal Executive Council meeting this year at the Council Chamber of the State House, Abuja.

Before the commencement of the Council meeting, members held prayers led by the Minister of Youth and Sports, Sunday Dare and his Aviation counterpart, Hadi Sirika.

In an unusual development, over 20 ministers and their ministers of state attended in person.

President Muhammadu Buhari who went on an official trip to Nouakchott, Mauritania, for the Third Forum of the African Conference for Peace is expected back into the country today.

Buhari, who was honoured by the Abu Dhabi Peace Forum with ‘Award for Strengthening Peace in Africa’ on Tuesday, told other African leaders that Nigeria and other regional bodies on the continent and the rest of the world are working assiduously to deal with existential threats to the very existence of humanity.

The President also noted that the country continues to engage bilaterally and multilaterally to comprehensively win the war against the insurgency and other related terror groups through kinetic and non-kinetic approaches.