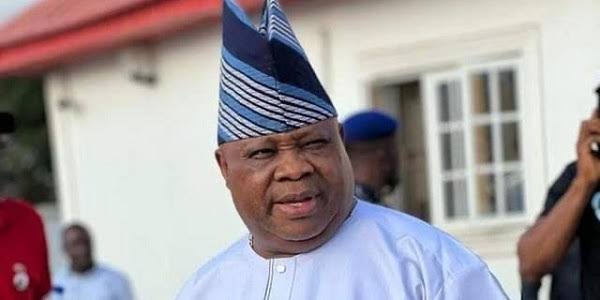 The Osun State Election Petition Tribunal on Wednesday compelled the State Resident Electoral Commissioner of the Independent National Electoral Commission to produce the nomination form and academic certificates of the governor-elect, Ademola Adeleke used for his nomination in the 2018 governorship election.

The panel, chaired by Justice Tertsea Kume, gave the order in a subpoena it issued on REC following the request of counsel for Governor Adegboyega Oyetola and the All Progressives Congress.

Counsels for INEC, Adeleke and the People’s Democratic Party had failed in their attempts to have the petition dismissed abruptly at the hearing after hot arguments and counter-arguments.

At the sitting of the tribunal on Wednesday, counsel for Oyetola and the APC, Abiodun Saka Layoonu (SAN), informed the court that the petitioners had filed a subpoena dated 3rd of November 2022, compelling REC to appear before the court to present Adeleke’s Form CF 001, which is the nomination form and all its attachments, including the certificates used in the 2018 election.

He indicated that since the bailiff was yet to serve REC with the subpoena, even after being signed, he would be compelled to ask for adjournment till Monday, 21 November.

Counsel for INEC, Paul Ananaba, SAN, objected to the application for adjournment, saying it was clear evidence that the petitioners were not prepared for diligent prosecution of the petition, citing paragraph 18(11) of the Electoral Act.

While also arguing that REC being subpoenaed to bring the said documents was never mentioned in the petition, Ananaba added that by planning to call REC as a witness without informing the tribunal earlier, the petitioners had violated paragraph 3 of the tribunal’s pre-hearing report.

He noted that the said paragraph 3 indicated that the tribunal must be furnished with a list of witnesses to be called 24 hour to the hearing day.

It was at that stage that the tribunal Chairman interrupted the INEC lawyer and said, “Why can’t you keep your gunpowder dry. Stop jumping the gun. After all, you have not been served. It is only when you are served that you can raise issues.”

Regardless of the tribunal Chairman’s comment, Ananaba insisted on his application that the petition should be dismissed immediately.

Counsel for Adeleke, Niyi Owolade, and that of the PDP, Nathaniel Oke (SAN), aligned with Ananaba’s arguments and prayed that the tribunal should dismiss the petition.

Responding, Oyetola’s counsel described the respondents’ arguments as baseless, saying the question of not being diligent in the prosecution of the petition was just a blanket statement by the respondents.

He argued, “The question of diligence is a question of fact. My learned friends have just made blanket statements, but they have never come with any facts to that effect. Your Lordships know that there was no hearing day that we had not been here to prosecute our case.

“Besides that, my Lord, it is our prerogative to conduct our case the way we want as permitted by the law and we have been so diligent with it because we know what we are doing. What then is their problem?” Layonu asked rhetorically.

He also referred to paragraph 69(vi) of the petition where it was expressly stated that the documents in question would be relied on.

In his further arguments, Layoonu said since the tribunal has not issued the subpoena, it could not have been served on the respondents, asking the INEC counsel to take a hint from the tribunal and stop being apprehensive unnecessarily.

He then urged the tribunal to discountenance all the arguments of the respondents’ counsel.

In his ruling, read by the Chairman, the tribunal agreed with the petitioners’ counsel and ignored the applications to dismiss the petition.

It said that the subpoena was issued by the tribunal around evening on Tuesday and would subsequently be served on REC.

He then adjourned the matter till Monday, November 21, for continuation of hearing.

Speaking with journalists after the hearing one of the petitioners’ Counsel, Yomi Aliyu (SAN) said, “The subpoena was to bring Adeleke’s Curriculum Vitae to court, including all the documents he filed in form CFO01. It concerns Adeleke on the certificates he claimed he had, and that is why you heard the protestation of his lawyers. But it must be brought to court one way or the other.

“The court must see his certificates that he got from wherever he said he got them. That is why you see that it was hot for two hours as they were asking for the dismissal of the petition.”