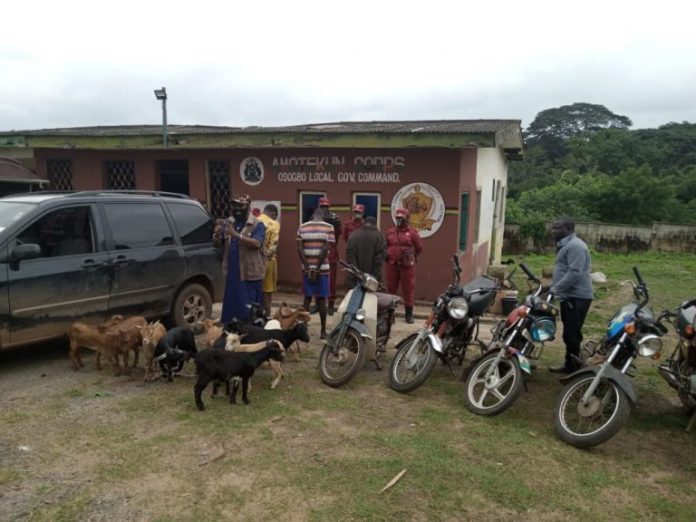 Personnel of the Western Nigeria Security Network code-named Amotekun Corps in Osun State have arrested three men for allegedly stealing goats in Osogbo and transporting them to Ibadan, Oyo State to sell them.

Parading the suspects including a 40-year-old mechanic, Segun Oladipupo, Wale Samuel and Sulemon Garbuga, in Osogbo, on Tuesday, the Field Commander, Osun Amotekun Corps, Amitolu Shittu disclosed that the suspects confessed to stealing 18 goats which were found in their possession.

He said the trio were arrested in the early hours in Osogbo on Monday after some operatives of Oyo State Amotekun, alerted the Osun command that some criminals were dealing in goats’ thefts and conveying them in a space bus to Ibadan to sell them.

According to him, the Osun Amotekun swung into action and burst some places where the suspects were nabbed with a space bus they were using for the alleged criminal operation.

Shittu explained that the suspects confessed that the bus was bought by their buyer who is now on the run, to carry out their operation.

On how they operate, Shittu said, “the suspects use beans and onions to cover those goats which according to suspects were picked at different locations in Osogbo and Ibadan.

“We were notified by some operatives in Ibadan, Oyo State that some criminals are engaging in stealing of goats. We decided to burst some places and discovered some suspects with a bus carrying goats. They put beans and onion to cover them, during interrogation they confessed to have stolen them.”

While urging the residents of Osun to be security conscious, the Amotekun boss said, “so many unthinkable things are happening in our societies, people have to be vigilant with their lives and security.”

He, however, assured that the suspects would be handed over to the police and charge to court after full investigation has been concluded.

In an interview, the three suspects admitted to have jointly committed the crime and explained that they have been in the business for some months.

They further confessed that it was their third time in stealing and transporting of stolen goats adding that they were caught on their fourth operation.

Oladipupo, however, linked the ownership of the space bus to her sister who bought it for him to be using it for transport business before he was introduced to stealing and selling of stolen goats by Samuel.