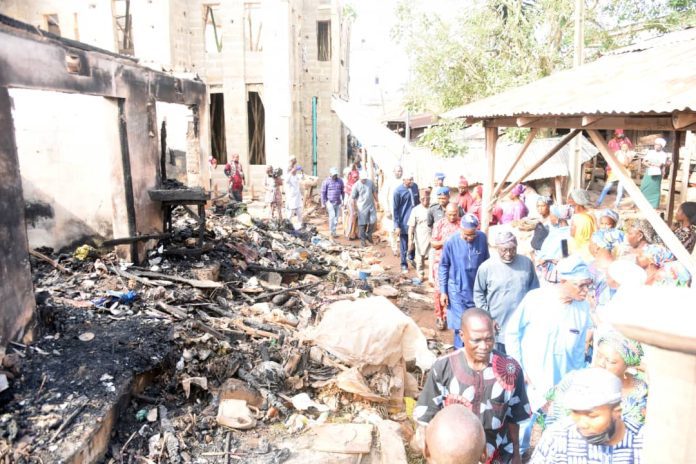 Following tragic fire incidents that occured within a week in Osogbo, capital of Osun State, Governor Adegboyega Oyetola, on Wednesday, urged the citizens to prioritize personal and collective safety as part of efforts to forestall possible disasters as dry season approaches.

The governor gave this charge during his on-the-spot assessment of the site of the Tuesday inferno at popular Oja-Oba market, Osogbo, the state capital. About six days ago, fire had gutted two separate warehouses at Alekuwodo Area of Osogbo and destroyed goods worth millions of naira.

While commiserating with the victims of the fire incidence of Oja-Oba market that occured in the early hours of Tuesday, where valuable property and personal belongings of the occupants of the affected shops were lost, Oyetola thanked God that no life was lost.

Addressing journalists shortly after the inspection and assessment of the level of damage caused, Governor Oyetola, who was represented by the Secretary to the State Government, Prince Wole Oyebamiji alongside his Chief of Staff, Dr. Charles ‘Diji Akinola, and cabinet members, described the incidence as unfortunate.

“Mr Governor, Adegboyega Oyetola is not around now but he has requested that a powerful delegation must come to commiserate with the affected market men and women, most importantly the Iyaloja and Babaloja of this market and that is why we are here. Mr Governor sympathises with the victims and prays that an incidence of such will not reoccur.

“As you all know, our governor is always concerned about the welfare and comfort of the citizens and as soon as he comes back, he will make a statement. So, on behalf of himself and the good people of Osun we commiserate with the victims and entire members of the market community,” he added.

Also, Iyaloja of the market, Mrs. Wosilatu Kasali, expressed deep sorrow over the incidence just as she appealed to the government and well-meaning citizens to support the victims and the market community.

Meanwhile, the members of the Governor’s delegation after the assessment of the site moved to the Ataoja’s palace to identify and commiserate with the monarch, Oba Jimoh Olanipekun.

At the palace, Oba Olanipekun appreciated Governor Oyetola and his government for taking the welfare and general well-being of the people of the state as priority.

He further lauded the governor for the show of concern over the recent fire incidences in Osogbo, saying the move was indeed a reflection of his administration’s commitment to the welfare of the people of the ancient town.

The monarch however called on his subjects to take precautions as the dry season is fast approaching saying this would further help to prevent such ugly incidence in the future.