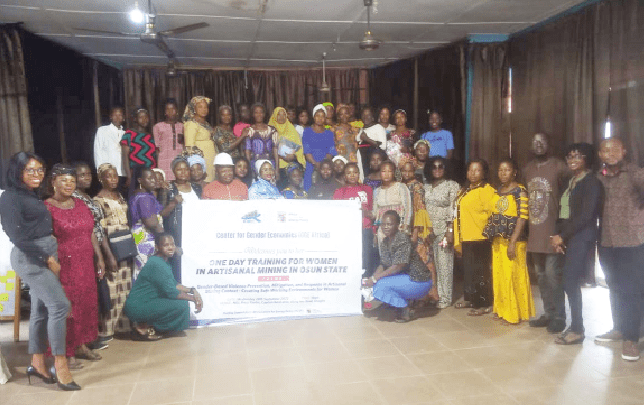 A Non-Governmental Organisation, Centre for Gender Economics, has lamented the rising marginalisation, sexual assaults and gender-based violence against women in artisanal mining in the gold-rich communities of Osun State by their male co-workers.

CGE Africa said it observed that usually, female workers at the gold mining fields across the state were being cheated, marginalised, sexually assaulted and robbed.

It was to this end that the NGO empowered female gold miners at a one day training with the theme, ‘Gender-based violence prevention, mitigation and response in artisanal mining context-creating safe working environments for women’ in artisanal mining in Osun State.
The training, held at the NUJ Press Centre in Osogbo, had in attendance women from different local government council areas where mining activities are carried out.

Some of the participants, while speaking at the training, revealed how robbers dispossessed them of their earnings from gold exploration.

An official of the Centre for Economic Africa, Vivian Otti, said that the project was funded by Africa Centre for Energy Policy.

Otti added that the training was to empower female artisanal miners to overcome marginalisation, inequality, sexual assault and gender-based violence on mining fields.

She said, “In the mining industry, we noticed that when it comes to roles and positions, they make the women do most of the hard or rough work and they are paid less, which is not supposed to be.

“Everybody has an equal right to be in a leadership position, so, what we are fighting for is that women in the mining sector should be given equal access to facilities and other benefits like men.”

Lecturing the participants on the myths and facts of gender based violence and marginalisation, Otti said, “Nobody should be limited to a particular role because she is a woman. So, every woman should be able to handle a good position in the mining industry. We also want to correct inequality in the mining industry, gender based violence and sexual abuse that these women face.

“We have given them the necessary information and skills that they need and we believe that their challenges have been ameliorated if not totally eradicated.”

One of the facilitators for the programme, Ademola Adebisi, called on the artisanal miners to always speak up against gender based violence and sexual assaults and report culprits to security agencies and other concerned authorities.

He said, “The programme was about gender-based violence issues affecting those that are working in the mining fields in Osun State. What we looked through is how they can protect themselves because protection comes from within.

“If you are not doing it for your protection, nobody will do anything for you. We have been able to sensitize them to know what to do at every time. It’s a kind of women supporting women. Women should support themselves to know that everyone deserves protection.

“We also told them the effects of gender based violence. Women are more vulnerable and we have a good number of them that have gone through this and that’s why it is important that women should know what to do. Most especially, those that find themselves in the field of mining. A lot of them are being marginalised and dehumanised.

“Some of them said some men do waylay them on the road and rob them. Some even said that people that bought gold from them would still set up robbery against them. It’s important they should understand the sector and know what to do.

“We also call on the government to support them. They have learnt from themselves and they have shared best practices having gathered from different local government areas and mining communities in the state.”