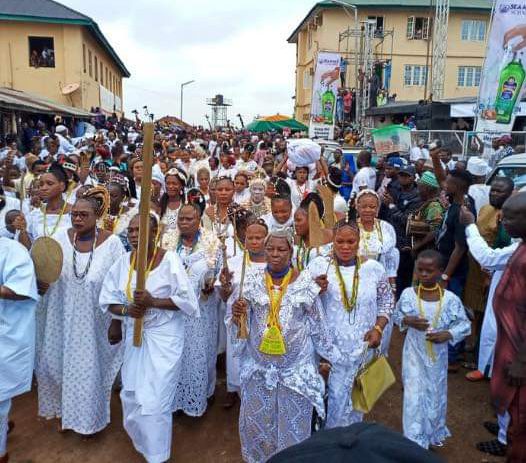 No cause for worry – traditionalists

Stakeholders have expressed worry after traditional worshippers, tourists and Osun goddess devotees shunned warnings by the state government and concerned civil society organisation that they should not drink the contaminated Osun River during the grand Finale of the annual Osun-Osogbo Festival held on Friday in Osogbo.

A civil society group, Urban Alert, had discovered that the 213km Osun River changed colour significantly before it carried out an independent tests on the water which revealed that the river had been heavily contaminated and harmful for human and livestock consumption.

After further scientific investigations, the organisation revealed that the Osun River which flows through Ekiti, Osun, Oyo, Ogun and Lagos States, was heavily contaminated with mercury, lead and cyanide from activities of the illegal and unregulated licensed gold miners operating in Osun State. The study showed that arsenic, iron and nickel have also contaminated the Osun River at a level harmful to man and livestock.

To this end, on the eve of the Osun Festival grand finale, the state government warned devotees, tourists and other participants of the celebration against drinking from the Osun River due to contamination.

The Commissioner for Health, Rafiu Isamotu, gave the warning while addressing journalists. But, checks by The Point on Friday revealed that multitude who besieged the Osun Sacred groove for the celebration drank and fetched the Osun River to their respective homes.

According to a devotee, Raji Ishola, who spoke with our correspondent after drinking and fetching the contaminated water, there was no cause for worry because the river, though changed in colour, would not have negative effect on consumers health.

He said, “Yes, I heard of the warning that we shouldn’t drink from the Osun River, but that’s for those who don’t know the power the river has. Even though it changed colour, I believe nothing will happen to me for drinking it. I fetched to solve problems and I have believe in its potency to remove every form of contamination that might be in the water.”

Meanwhile, a release by the Communication Officer of Urban Alert, a civic-tech organization at the forefront of the advocacy for swift action by the government and other stakeholders on the contaminated Osun River and other water bodies polluted by gold miners in the state, Oluwatosin Olarewaju, said it was worrisome for people to have drank from the water despite warnings.

Olanrewaju flayed government for issuing warning on the eve of the grand finale without taken concrete action to sanitise the polluted river.

However, the state governor, Gboyega Oyetola while addressing participants at the groove, said the government would continue to seek ways of mainstreaming its unique potential as a cultural and tourist destination.

Oyetola, who was represented by the Secretary to the State Government, Wole Oyebamiji, said the desire to leverage on the uniqueness of the festival motivated the design of a culture and tourism masterplan which has guided its interventions in the tourism sector.

Meanwhile, there was heavy security deployment during the celebration as security personnel were strategically placed around the Groove and other locations to prevent a breakdown of law and order.

The deployed personnel included those of the Nigeria Police Force, Nigerian Security and Civil Defence Corps, Oodua Peoples’ Congress and other paramilitary officials. Tourists from Brazil and Slovenia and other foreign countries were heavily guarded by Armed Tactical Squad of the Nigeria Police at the grand finale of the festival.

Some of the devotees at the grove “possessed“ by the spirit of the Osun goddess were seen rolling unconsciously on the ground. According to the Curator and Site Manager of Osun Osogbo Grove, Adekunle Fatai, no fewer than 60,000 devotees and tourists graced the celebration. 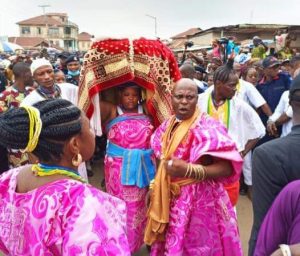 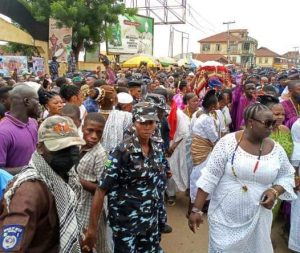