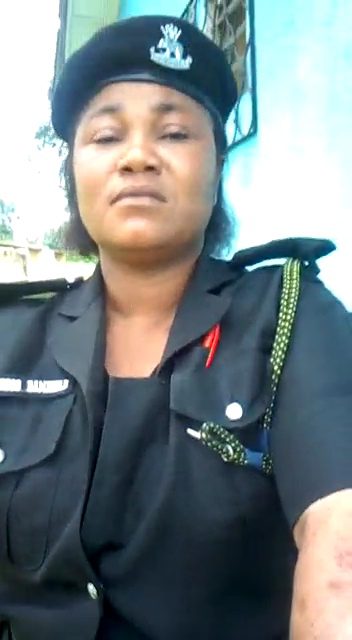 Almost one month after the Inspector-General of Police, Usman Alkali Baba, directed the Osun State Commissioner of Police, Olaleye Faleye, to investigate the alleged assault on a policewoman by her superior officer, Matthew Ajayi, the victim and members of the public still await outcome of the ordered probe.

The Point had on November 2, reported that a female police Inspector in Osun State, Olorunsogo Bamidele, accused her superior officer, Ajayi, of stripping her naked and beating her up because she refused to give in to his sexual advances.

Ajayi, the Divisional Crime Officer of Ode-Omu Police Division, in Ayedaade Local Council of the state, where the female officer is attached, was said to have stripped and brutalized her in the presence of other officers and civilians at the police station.

Bamidele, while displaying injuries on her arms and chest in a viral video, narrated her ordeal in the hands of the DCO, saying that she didn’t do anything to warrant the assault, save for rejecting his advances and refusing to “date” him.

The officer claimed that she explained to Ajayi that she is married and cannot give in to the affair and he ended up trying to “blackmail” her before proceeding to attack her.

According to her, some civilians at the police station rescued her from being gunned down by Ajayi, who she alleged picked up a dane gun with the intention of shooting her.

“What is my offence? He (Ajayi) started beating me to the extent that he stripped me naked. Look at my body; it is Ajayi Matthew, he said I should befriend him and I said no; that I am a married woman and can’t befriend him. He started blackmailing me that he is the one befriending me and it’s not true.

“He beat me up in the presence of my co-workers, my righter and two constables and ten civilians. After doing that, he went inside and carried a dane-gun and said he wanted to gun me down.

“The civilians now took me out of the office. They said I should be running out and I said no that if he wants to kill me, he should kill me. I asked them to assist me and they should help me. Ajayi wants to kill me,” she had lamented.

Swiftly, the IGP had reacted to the viral video by directing Osun Commissioner of Police, Faleye, to investigate the alleged assault on the woman by the DCO in Ode-Omu.

“We will await the report of the investigation from Osun State Police Command before necessary actions are taken. However, we assure the general public that justice will be done in the case, to protect the core values and ethics of the NPF,” a statement issued by Muyiwa Adejobi, the Force Public Relations Officer, had read.

While carrying out the order, Faleye, on November 2, ordered a discreet investigation to unravel circumstances that led to the unethical behaviour of Ajayi, an Assistant Superintendent of Police.

The Command’s spokesperson, Yemisi Opalola, in a statement had said, “The CP in his swift intervention, has interviewed the police officers (parties) involved in this unprofessional act and consequently ordered discreet/thorough investigation of the incident to unravel the circumstances that led to this unethical behaviour.

“Therefore, the CP is assuring the general public that justice will prevail on the matter,” she had assured.

But 19 days later, the police are yet to complete the investigation on the matter despite claiming to have invited the duo for questioning.

When contacted on the telephone by The Point to get an update on the matter, the state command’s PPRO, said investigation was ongoing adding that findings by the investigator would be made known afterwards.

Opalola told The Point that, “we are still investigating the matter. We will make our findings known after.”

Checks by our correspondent revealed that the alleged attacker is still working at the Ode-Omu police station alongside the victim.
However, efforts to speak with any of them were not successful.

Meanwhile, a non-profit organisation in Osun State under the auspices of Community Advancement Initiative for Self Reliance has taken its advocacy for full implementation of Violence Against Persons Prohibition to Osun State Police Command Headquarters and advocated for speedy investigation of Sexual and Gender-Based Violence cases in the state.

For CAI4SR, should the police carry out prompt and speedy investigation of the cases of SGBV, it would aid speedy justice delivery for survivors of the unlawful acts.

CAI4SR Executive Director, Mrs. Eni Ayeni led members of other civil society organisations to Osun State Police Command and they were received by the New Commissioner of Police, Faleye Olaleye, and other top officers of the command.

Ayeni explained that the advocacy visit to the Command was part of efforts towards the full implementation of the VAPPL in Osun State to curb sexual and gender based violence.

She appealed to the Commissioner of Police to use his office to see to the speedy investigation of SGBV cases as stated in the laws.

She noted that her organisation and Lawyers Alert are members of the SGBV Justice Network Cluster under the USAID SCALE project advocating for the activation/implementation of VAPPL and ACJL in Bauchi, Benue, Enugu, Kaduna, Osun, and the FCT, towards speedy justice service delivery and resolution of Sexual and Gender-Based Violence (SGBV) cases.

While responding, Faleye commended CAI4SR and other partners for their efforts in ensuring justice for survivors of Sexual and Gender-Based Violence.

He expressed his heartfelt opinion on how the case really touched him and how negligence has been the order of the day, where most of the survivors’ families often withdraw such cases from going to the court.

He gave emphasis on the fact that most of these cases are being withdrawn due to lack of knowledge and poverty of relations of SGBV survivors.

Olaleye appreciated the passion of the organization and promised to support the progress of the work.