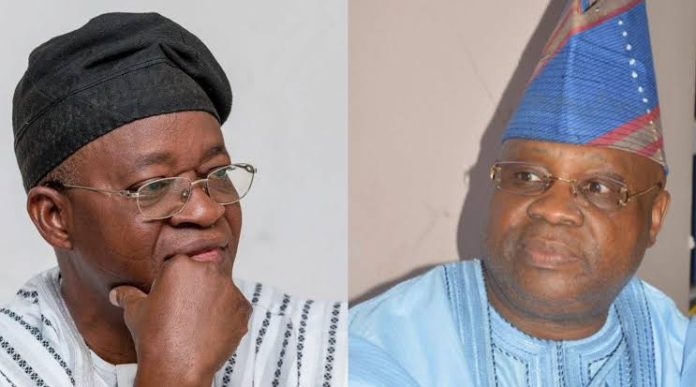 Osun State Election Petition Tribunal, on Wednesday, admitted another set of vital documentary evidence as exhibits against the declaration of Ademola Adeleke as Governor-elect by the Independent National Electoral Commission.

The documents admitted were another set of Form EC8As which are results of the election for 10 Wards in Egbedore, 11 Wards in Ejigbo, 10 Wards in Ilesa West and 11 Wards in Irepodun local government areas of the state.

Governor Adegboyega Oyetola and the All Progressives Congress are challenging the declaration of Adeleke by INEC as winner of the July 16, 2022 governorship election in the state.

The Point recalls that the tribunal had on Tuesday admitted the first set of exhibits against INEC, Adeleke and the PDP.

At the resumed hearing on Wednesday, counsel for Oyetola, Yomi Aliu (SAN) informed the tribunal that another schedule, containing the list of other documents to be tendered had been given to the respondents’ counsels and they have jointly cross-checked the documents.

He then applied to tender the documentary evidence as exhibits as listed on the schedule.

Counsels for Adeleke, Niyi Owolade, PDP, Nathaniel Oke (SAN) and INEC, Olakunle Faokunla confirmed that they have truly cross-checked the schedule and the documents listed therein.

They took objections to the admissibility of the documents and indicated that they would canvas arguments in their final written addresses.

The Chairman of the tribunal, Justice Tertsea Kume, in his ruling admitted all the evidence and marked them as exhibits.

After the ruling, the petitioners’ counsel informed the tribunal that the respondents have been furnished with another schedule of the documents to be tendered at the next hearing.

Counsels for all respondents confirmed they have been served and indicated that they would use the schedule to cross-check the documentary evidence before they are tendered.

The tribunal subsequently adjourned the continuation of hearing till Thursday (today).

Addressing journalists after the sitting, the Petitioner’s counsel, Yomi Aliu said, “we will continue the tendering of documents tomorrow (today) and as we have said, this case is majorly going to be document-based.”