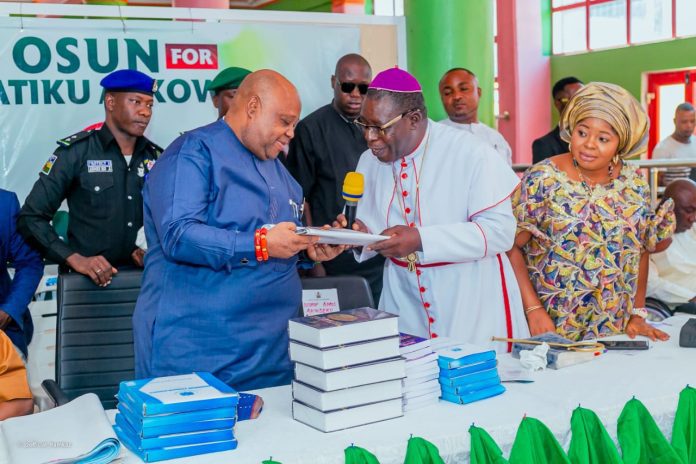 The Governor of Osun State, Ademola Adeleke has affirmed his administration commitment to move the state forward in spite of the challenges inherited, noting that he is prepared to put in place necessary policies to stimulate growth and development of the state.

The governor gave the assurance on Tuesday when he received the leadership of the Methodist Church of Nigeria, at the state capital, Osogbo, for the annual prayer session always organised by the Church for the govt of the state.

Governor Adeleke said his administration would focus on programmes that would have direct bearings on the lives of citizens, reiterating commitments to lead the state out of the quagmire that past inadequacies dragged it to.

“Our 100 days programmes have already begun and in no time, it will manifest for everyone to see. Osun state will move forward,” he said.

Governor Adeleke who attested to the efficacy of prayer in achieving set objectives, said God made his emergence as Osun State Governor possible, in spite of the relentless efforts of certain forces.

He urged people of the state to unite in the effort to move the state forward, warning that “some people want to use religion to divide us. In my own administration, that will not be tolerated.”

“Because, when I look at my story, God has been so faithful to me. My own story is different, I always defeat an incumbent. I have to thank God for what he has done for us in Osun because we prayed and won. We won in 2018 too but was cheated yet we didn’t gave up,” he said.

“The crowd I saw on the day I returned from the US after studying, I know God is ready for us. So, we changed our prayer in 2022 that if we win, every evil people that want to stop us, God should clear them away. So, be specific in what you pray for, because God listens.”

Speaking earlier, the Archbishop of Ilesha Arch-diocese of Methodist Church of Nigeria, Most Reverend Amos Akintola Akindeko, lauded the Governor for his abiding faith in God Almighty, which he said aided his path to office.

The clergy who went historical lane on the annual prayer session by the Church and its varying testimonies, led other men of God to pray for the success of the administration.

“God will surprise your government. He will make your enemies to prostrate before you. I know the allocations coming to Osun is minimal, but God will support your administration to deliver good governance for the people,” the clergy man prayed.