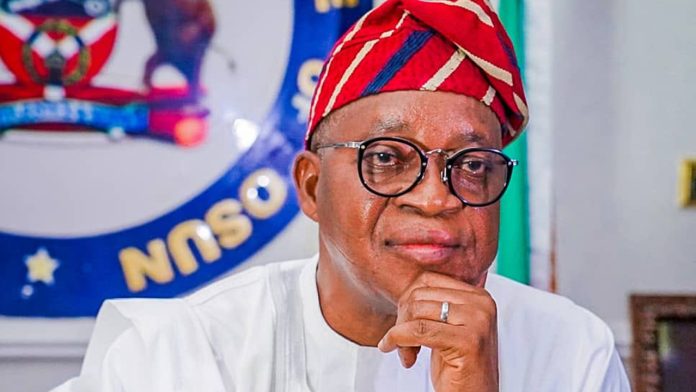 Urges Oyetola, APC not to consider him for reappointment

Stakeholders of Ifon-Orolu community in Orolu Local Government Area of Osun State, have called on the leadership of the ruling All Progressives Congress in the state, Governor Gboyega Oyetola and other chieftains of the party to stop Hon. Adekunle Benson, the caretaker chairman of the council from contesting the October 15 local government election in the state.

The community, under the umbrella of Ifon-Orolu Stakeholders Forum, in a letter dated September 12, 2022, and signed by all the royal families, Ifon-Orolu Progressive Union among others, rejected the candidacy of Benson who had administered the council for the last five years, saying that his administration had brought untold retrogression and atrocities to the community.

The letter entitled: “Re:Abysmal Imposition of Hon. Adekunle Benson as the Chairmanship Candidate in Orolu Local Government. Passionate Request For A Preferred Chairmanship Candidate In Orolu Local Government, Ifon-Osun,” and addressed to Prince Gboyega Famodun, the State Party Chairman, of which the attention of Governor Oyetola was sought, alleged that Benson embezzled monthly allocations of the council and there was nothing he achieved during his tenure.

The community, including its traditional institution, said it had on August 31, 2022 written the party leadership in the Orolu LGA and demanded the replacement of Benson as APC chairmanship candidate for the council election but the party executive were yet to react.

“It occurred to us that the decision of the leaders of the ruling party (APC) in Orolu is contrary to that of the community Stakeholder forum by implementing Hon. Adekunle Benson who is physically, morally and healthily incompetent as the selected candidate for chairmanship in the forthcoming Local Government election exercise which is detrimental to the favourable primacy chances of the ruling party,” the community said.

They called on APC leaders including Famodun, Oyetola, Chief Bisi Akande among others to stop the alleged imposition of Benson.

On the reason why the community rejected Benson, the community stakeholders said, “it is empirically glaring that the sequential 5-years previous administration of the so called Hon. Adekunle Benson has dastardly deteriorated the development of the community without any positive impact by engaging himself in the atrocities itemised below just to mention a few:

“Embezzlement of the monthly allocations viz-a-viz acrobat returns of the huge cash portion of the allocation to the State for negotiation and bid for nepotism and favourism from the State Party Leaders.

“Lackadaisical attitude to the yawning of the community stakeholders on community developmental issues which the burden of the allocation rests upon like non-grading of access road networking both in the town and lesser villages of the community, non-rehabilitation of the Local Government premises which was brutally embattled during the last #Endsars protest.

“Being the Chief Security of the community, he (Benson) is aversed to the protection of inhabitants’ lives and property by neglecting all forms of security outfit operating in support of the official securities like NPF, NSCDC, DSS e.t.c. hence, rate of crime, robbery, burglary and social vices are geometrically recorded everyday.

“Collaboration with the career officers of the Local Government to extravagantly spend huge portion of the allocation on political leaders in Orolu for an indiscreet proposition to acquire political posts and functionaries.

“On behalf of the Council of Traditional Chiefs, Olufon Royal Family, Ifon Progressive Union {IPU} and the entire Stakeholders in Ifon-Osun, we thereby passionately request the assent of the APC leadership authority to select a preferred Chairmanship candidate from the other contesting aspirants in Ifon-Orolu apart from Hon. Adekunle Benson.

“In view of the aforementioned, we fervently hope that our request would be favourably considered as it pertinently represents the interest of the entire community members. It is also worthwhile to note that aligning with the interest of the people may forestall any resultant hullabaloo which may arise. We shall be exceptionally delighted if the request is being granted,” the letter read.

Meanwhile, Benson, when contacted by our correspondent on the telephone denied the allegations and stressed that he did his best as the caretaker Chairman of the council in the last five years.

Denying alleged embezzlement of public funds in the local government, he said he had empowered hundreds of youths and other residents of the council area with cash and tools.

He said he wouldn’t sacrifice the Chairmanship ticket of APC for another aspirant.