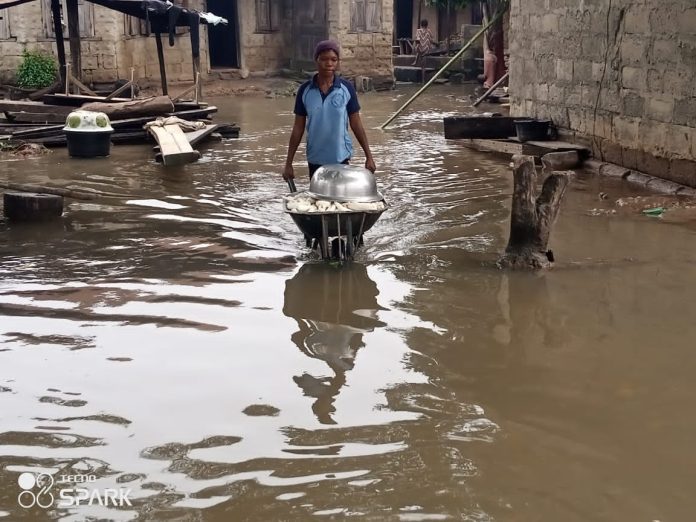 Over 50 families in Offerekpe community, Ikwo Local Government Area of Ebonyi State, sacked from their residential buildings by flood occasioned by persistent rainfall, are currently calling for help from government and other well-meaning personalities in the society.

The flood disaster in Offerekpe was said to have resulted from its proximity to Offerekpe River, at the boundary between Ebonyi and the neighbouring Cross River State.

The residents were said to have suffered a huge loss as their properties were allegedly damaged by the flood which also prevented school children from attending schools for days.

Meanwhile, the affected people had since devised means of crossing the water to enable them to fend for their daily needs.

Our correspondent, who visited the community, observed that logs of woods, iron bars and canoes were being used to access the neighborhood.

Those who could not afford the cost of being ferried resulted in walking in the water.

Villagers placed their harvested farm produce at a far distance to their flooded shelters under extremely difficult situations as they could hardly cook food.

Leaders of the community and the affected residents, describing the situation as unbearable, urged the state government to come to their aid by dredging the river in order to prevent another surge.

Joseph Eworo, one of the leaders in Offerekpe, expressed worries over the development, stressing that they were exposed to intense hardship.
According to him, although they had experienced flooding in the past years, it had not been so bad.

He recalled that many houses were submerged by water. Many of the affected structures, worth millions of naira, had been washed away by the flood, he said.

Eworo called for immediate intervention by relevant government agencies to assuage the suffering of the residents.

Another community leader, Stanley Ojikwa, noted that the two affected villages, Akpoha and Ebora, had been deserted due to severe flooding that destroyed many houses.

The situation, he said, was worsened by the surge of the Offerekpe River. He also noted that strange snakes had since been attacking those who made efforts to return to their houses.

A youth in the community, Juaz Idoko, said that the situation had forced them out of their farms.

According to him, the farmers had to either swim or use canoes to access their farms in order to harvest some of their farm produce like yam, potatoes and cassava for sustenance.

“Since this flood started, we have not had our normal lives back. Most of us have been wearing the same clothes for about a week now because others had been washed away by flood. We even find it difficult to move out because we don’t want hunger to kill us. We improvised a log as a canoe to be able to move on the water to our farms in distant locations.

“We need the assistance of the Ebonyi State Government and other well-meaning individuals because this suffering is too much for us. This (pointing to the river) Offerekpe River needs attention. Government needs to dredge it and ensure that water doesn’t overflow its banks. We need succour because all our belongings have been damaged and some washed away by the flood,” Idoko said.

Also, two of the affected women in the community, Ebonga Oke and Ginika Mba, lamented that the situation had deprived them of their means of livelihood. They appealed to the wife of the Governor, Mrs. Richael Umahi, to intervene urgently in the interest of women and children, especially on health related issues.

A Presbyterian priest in the area, Reverend Agwu Okoro, called on both the federal and state governments to involve experts in finding a solution to the environmental challenges facing the riverine communities.