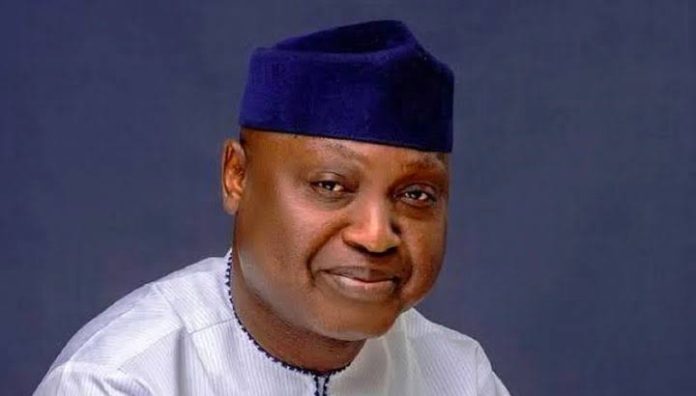 Ekiti State Governor, Biodun Oyebanji has signed the 2023 Appropriation Act of one hundred and thirteen billion, Six hundred million Naira (N113,600,000,000.00) as passed by the State House of Assembly, commending the Legislators for the robust and harmonious relationship between it and the executive arm of government.

Speaking shortly after signing the budget christened “Budget of Strong Beginning” at the Council Chamber of the Governor’s Office, Ado-Ekiti on Friday, Oyebanji expressed his appreciation to the people of the state for their overwhelming and unflinching support for his administration, noting that his first fiscal document in office was carefully crafted after due consultation with all relevant stakeholders in the drive to lay a solid foundation for his administration and achieve the desired prosperity for the people.

He expressed his profound gratitude to members of the State House of Assembly for their cohesiveness and for passing the 2023 appropriation bill in record time as well as doing thorough public opinion and legislative scrutiny of the bill before its final passage.

The Governor, who recalled that he presented the bill to the House on November 3rd, 2022 to afford the Honourable members sufficient time to scrutinize the document and engage all the relevant stakeholders in a bid to abide with the Fiscal Sustainability Plan that ample time should be allowed for legislative processing of annual appropriation bill, emphasized the focus and vision of the administration to make the state a land of prosperity, peace and progress where the people can reap the fruit of their labour in dignity, good health and safety.

He thanked the Nigeria Governor’s Forum (NGF) secretariat for providing technical support to the state in developing the latest NCOS template which will be used in the publication of the 2023 budget which is expected to be replicated in all the MDAs to further equip officers of the state for the implementation of the budget as well as ensure easy and seamless implementation of the fiscal document by the end users in view to meeting the disbursement link indicator.

While stating that that the budget was designed to lay a strong foundation for the administration by leveraging on the achievements of the past administration, Governor Oyebanji disclosed that the breakdown of the budget would soon be officially presented to the members of the public by the Special Adviser on Budget, Economic Planning and Performance Management

He noted that the signing of the appropriation bill into law was the administration’s affirmation of its readiness to ensure fiscal discipline and effective implementation of the budget.

The Governor used the opportunity to reaffirm the commitment of his administration to further collaborate with development partners and donor agencies in the drive to hasten development of the state.

“It is my pleasure to be in your midst today to sign into law the 2023 budget of strong beginning in fulfilment of my constitutional obligation bestowed on me by the 1999 constitution as amended as Governor of Ekiti state. I count it a rare privilege to serve the good people of Ekiti state in this capacity at this auspicious time. The year 2023 budget, which is the first fiscal document of our administration has been carefully crafted after due consultation with all relevant stakeholders to lay a solid foundation for our administration.

“I thank the good people of Ekiti state for their unflinching support and cooperation since my inauguration on October 16, 2022. Your support, which has been overwhelming has kept us going and resolute in our determination to further transform and develop our state through our blueprint as encapsulated in the six pillars of our administration. I thank you all for the love, prayers and unwavering support as we settle down to impact lives and banish poverty from our land through job creation and creating the enabling environment for micro, small and medium enterprises to thrive and empowerment programme for the teeming youths and women.

“I’m very delighted to state unequivocally that the House of Assembly worked tirelessly, conscientiously and diligently in the overall best interest of the good people of Ekiti state to ensure painstaking and careful legislative review and timely passage of the appropriation bill without compromising due process and quality review. It is instructive to place on record that without negotiating the autonomy of the three arms of government, the 6th House of Assembly has been a worthy partner in progress with the executive, rather that constitution a cog in the wheel of progress.

“As you are undoubtedly aware, budgeting is dynamic, on this note, our budget has fully adopted the National Charter of Accounts template, which is a requirement for the State Fiscal Transparency Sustainability Programme for result and now the state action on Business Enabling Reforms of the World Bank. He said.

Earlier, the Speaker of the House of Assembly, Bunmi Adelugba, commended the Governor for making the budget process people driven as recommended under State Fiscal Transparency Accountability and Sustainable Programme (SFTAS).

The Speaker, who urged the Governor to ensure proper implementation of the appropriation law to the letter prayed for robust economy that would assist the administration achieve success in driving the six pillars to desired end.

She assured the Governor of the unflinching support of the House by making desired impact on the lives of the people.

The budget signing ceremony was also witnessed by senior government officials, including the Deputy Governor, Monisade Afuye, Deputy Speaker of the House, Hakeem Jamiu and other members of the state House of Assembly, others were the Secretary to the state Government, Dr Habibat Adubiaro, the Head of Service, Barr. Bamidele Agbede, Attorney General and Commissioner for Justice, Mr Dayo Apata and members of the State Executive Council.