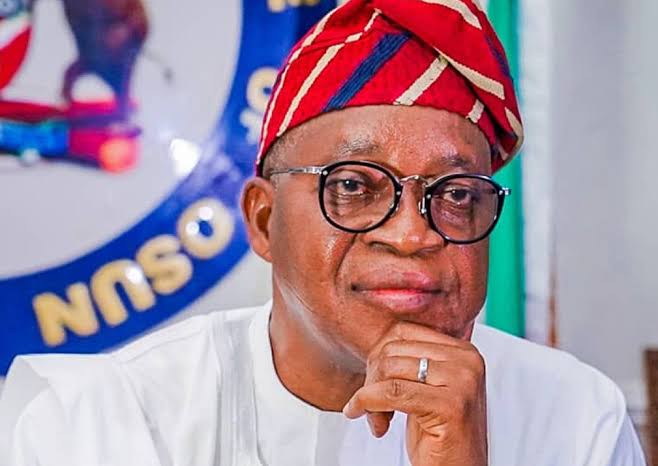 Osun State Governor, Adegboyega Oyetola, has been nominated for the prestigious Honorary Award of a Fellow of National Institute of Credit Administration, in recognition of his tremendous and sterling performance in raising the bar of good governance in the state.

The recognition and choice of the governor for the coveted award came on the heels of the thorough assessment of the outstanding performance and monumental achievements he recorded in four years in office.

The award, according to the Institute, would be bestowed on Oyetola and his Lagos State counterpart, Babajide Sanwo-Olu, at her investiture ceremony, on Tuesday, November 22, 2022 in Lagos.

NICA noted that the Honorary Award on the two governors is a clear testimony to the fact that they belong to the distinctively progressive governance elites in the country.

The Institute, in a letter, conveying the choice of Oyetola after a careful selection process, revealed that the formidable contributions made in governing Osun and the wonderful strides in managing Osun State finances over the past four years recommended Oyetola for the Honorary Award.

The letter reads in parts, “Your induction and investiture as Honorary Fellow of the National Institute of Credit Administration along with your counterpart in Lagos, Mr. Babajide Sanwo-Olu, is a signal that you are one of the distinctively progressive governance elites in the country recognised by NICA.

“The President of the Federal Republic of Nigeria — President Muhammadu Buhari (GCFR), who signed our Institute’s enabling act into law will be in Lagos to formally unveil the Act to the public on Tuesday, November 22nd, 2022 at Four Point, Sheraton Hotel, Victoria Island, Lagos, at 10:00am.

“Consequently, the Governing Council of NICA reasoned that the occasion of Mr. President’s visit provides appropriate incentive for your investiture as Honorary Fellow (FICA) of this great Institute, especially when viewed against the phenomenal credit economic stimulation activities of Osun State since you assumed office as the State Executive Governor.”