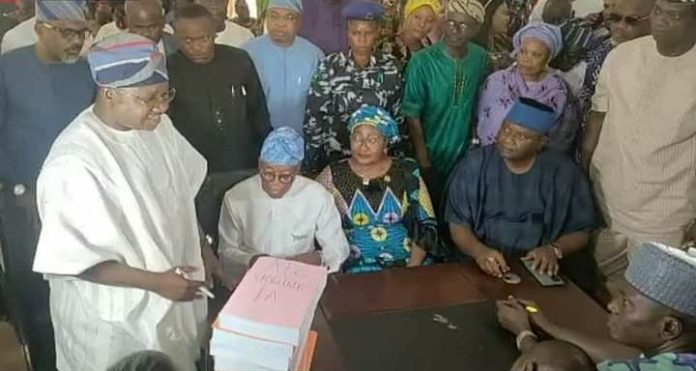 The governor, who was accompanied by his wife, Kafayat, Deputy Governor, Benedict Alabi and the State Party Chairman, Gboyega Famodun, among other top government functionaries and lawyers, stormed the premises of the Osun State High Court on Friday to submit the voluminous petition.

Oyetola, the candidate of the All Progressives Congress in the July 16 governorship election, is challenging the victory of Senator Ademola Adeleke, the candidate of the Peoples Democratic Party, who has been declared winner of the keenly contested poll by the Independent National Electoral Commission.

The petitioner also dragged INEC before the court in the petition.

APC chairman in the state, Gboyega Famodun, had during a press conference disclosed that the party and its candidate decided to challenge Adeleke’s victory because their lawyers had informed them that they have good cases and they would win in court.

A lawyer among the APC team, Ibrahim Lawal, posted on his verified Facebook page on Friday that Oyetola and the party discovered over-voting in 749 polling units across 10 local government areas of the state.

Lawal said, “We are challenging 749 polling units scattered across 10 Local Government for over-voting.”