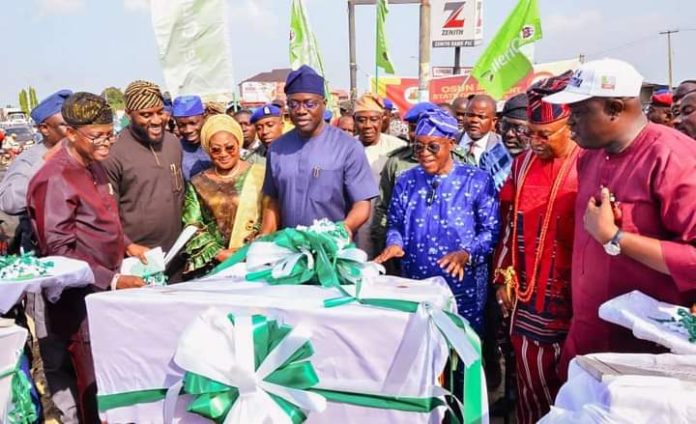 History was made on Thursday in Osogbo, capital of Osun State as Governor Gboyega Oyetola and his counterpart in Oyo State, Seyi Makinde jointly flagged-off the reconstruction of Osogbo-Iwo-Ibadan road awarded to contractors in the sum of about N24 billion.

The two governors who belong to different political parties put their political differences aside and embarked upon the reconstruction and rehabilitation of 91kilometer road which they said would improve the economic potentials of the two states.

Speaking during the flag-off ceremony, Oyetola, of the All Progressives Congress, saluted the political sagacity and astuteness of Makinde, of the Peoples Democratic Party, whom he said rose above all political differences and considerations to collaborate with him, not only to ensure that the road project came to fruition, but to further entrench regional integration.

He said: “the project was initially conceptualised, our plan was to fix the Osogbo-Iwo section that belongs to Osun. We, however, on a second thought observed that the Oyo State section too was in a very bad shape and capable of defeating the objective of our road Reconstruction/Rehabilitation effort.

“We reached out to Governor Makinde and, without hesitation, he embarked on this invaluable voyage with us. I must, therefore, reiterate that, but for the tenacity of my counterpart from Oyo State and his understanding, this all-important collaborative project would not have become a reality.

“I believe this kind of collaboration will further promote regional integration in the South-West. I, therefore, on behalf of the Government and good people of Osun, once more thank my brother-Governor for this rare collaborative effort,” the governor added.

Also speaking, Governor Makinde said the road project which is expected to be executed within 18 months, was a revolutionary approach to governance between the two states, adding that it was historical.

“When we just came in, we started on this path with one of the biggest collaborations in the history of the south west of Nigeria. We all came together and decided on creating the Western Nigeria Security Network codenamed Amotekun corps.

“This happened because we put our people first, also about two years ago, we celebrated another win that resulted from this revolution, my brother, our host Gov Oyetola was a big part of the history because we were watching our children wasting away at home at Lautech because of ego. When we came in, I called him and we held meetings and we decided to put ego aside and look at the interest of our people. To the glory of God, we solved the problem. I am saying it without mincing words, if it were to be a PDP governor in Osun State we couldn’t have done any better.

“Let me use this opportunity to once again acknowledge the leadership qualities of my elder brother and say thank you. For the Osun section of the road, it was awarded N11.3billion, for the Oyo section N12.5billion. For the two states, we are pulling resources together to the tune of about N24billion.”